2 components in 1 master, 1 in another. Path issues 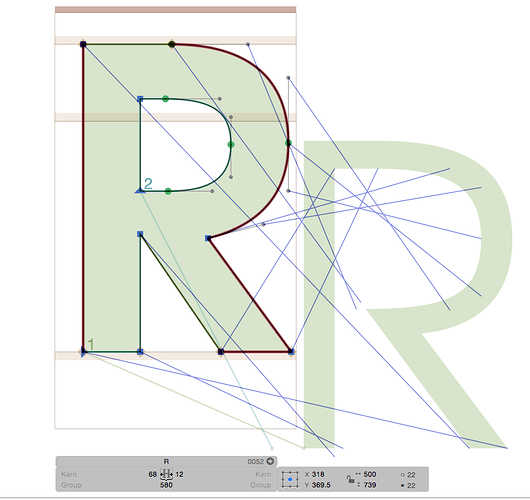 First time posting here so apologies if this has been covered already.

Just trying to get to grips with interpolation. I’m having issues with a bold R that is 2 components as it has a counter, and a Light R that only has the one component as the bridge doesn’t join to create a counter.

I’ve tried decompose components but I’m not sure I follow how that functions, it seems to do nothing.

My number of points are the same but because of the differences in path structure they overlap a lot which I assume is the main reason I can’t interpolate that letter.

You will have to restructure the paths so they are compatible. Please read the ‘Multiple Masters’ tutorials. Or the chapter in the handbook.

What you called components are actually paths. Components are used to refere to different Glyphs to reuse their shape.

Select the two nodes where the stem connects with the bowl and run ‘Reconnect nodes’ from the context menu. Then draw the shape as in the light only that the sharp corner is on top of the stem. The resulting overlap is removed on export, so you can keep it.