I’ve downloaded and used mekkablue’s script for adding PUA codes and it was successful a couple of times. The last time I used it, I accidentally entered that the values should start at E70 and was given the error message that it needs to be a 4 digit value…

So, I escaped and re-entered to start form E700, but it will not accept that i have entered E700 - it keeps giving me the same error message. i then tried E800, F700, etc and still all the same error.

I have deleted the script, re-downloaded and re-added to the scripts folder and restarted my machine. Is there some way to clear Glyphs caches? 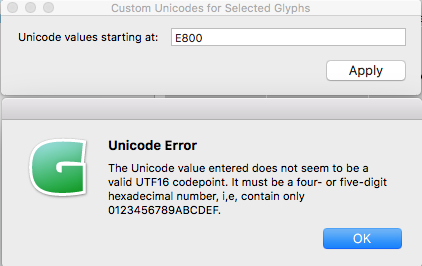 I just uploaded a new version of the script.
The script now checks your entry and cleans it up while you type or paste. There was also a bug that caused the script to apply only the previous entry, so you would have to run the script twice. Fixed now.