I’m having trouble with an SBIX font with transparent png’s.

Everything looks great in InDesign / Illustrator, but the problem occurs when they export as PDF files. Upon generation the pdf files are appearing very pixellated, but they are nice and sharp in the app, and everything is working as expected.

jpg is working fine upon generation, but I need them to function in pdf format too. Which is the main confusion…

I don’t know if this problem is due to lack of Adobe support, or if my files are setup incorrectly. Has anybody had this issue before?

I don’t think that is a problem with the font. Did you install the fonts in the Adobe Fonts Folder or in the System. Have you tried to make a pdf that contains emoji from the Apple system font?

Thanks again for your speedy Reply Georg!

The fonts are installed in the system, and I’ve added in an additional SVG table (SBIX to SVG), and that seems to have solved the PDF problem, which is great, however, a new problem has occurred, now it looks as though the kern feature no longer works in the Adobe apps…

The kerning worked great in Adobe apps before the additional SVG table.

I’ve gained a new problem, as I’ve solved a previous one…

Have you ever had a similar issue before?

I think it depends on your pdf settings, habe you experimented with those? It may also simply be a bug in the Adobe app.

Thanks guys, this is all super helpful!

I could export the original sbix font (without svg table) as a pdf in InDesign, if I unchecked “downsizing” in the export dialogue box, but the client uses InDesign interactive pdf’s and they can’t seem to generate a .pdf without it getting extremely pixelated, however, the SVG table solved this.

I did the kerning in MetricsMachine, and copied the kerning over from a .ufo, do you think that could be a potential reason for the lack of kerning with a svg table?

the client uses InDesign interactive pdf’s and they can’t seem to generate a .pdf without it getting extremely pixelated, however, the SVG table solved this.

This is likely a bug in Adobe’s PDF generator which does not seem to handle sbix well.

I did the kerning in MetricsMachine, and copied the kerning over from a .ufo, do you think that could be a potential reason for the lack of kerning with a svg table?

No. Kerning is kerning. Did you verify the kerning settings in InDesign?

Above is the standard SBIX version (which will not generate as a pdf correctly), but has kerning and looks correct.

Below is the same file with an added SVG table, and kerning seems to be messed up.

Pretty mental eh? Have you any idea why this could be happening? 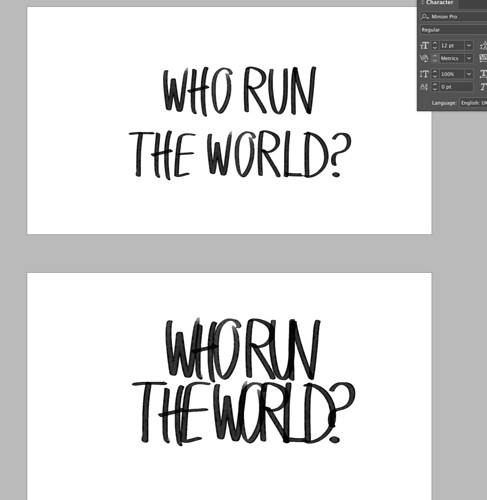 I don’t think it is the kerning. It is the scale. Perhaps the spacing too.

hhmm, I’m not sure how this is happening, I’ve added the SBIX to SVG in the custom parameter, and it shares the same iColor layer name too.

Do you have any idea why this custom parameter would mess everything up so much?

In your case, the iColor 1000 layers are a problem, because the sbix to SVG parameter assumes that the placed images are of the same height as the name indicates, i.e., 1000 px.

We are looking into this, but may take a while.

In the meantime, perhaps Adobe support can help you get the sbix PDF export going?

Is this fix in the latest version of 2.6?