There are also some discussion about the auto alignment warning here: https://forum.glyphsapp.com/t/changes-from-auto-alignment-interface/8469
but it’s more about the interface and naming.

So with every new beta version I get new warnings of letters that have been aligned automatically for a long time.

If I ignore the affected letters by the warning and check whether they are not automatically aligned, this is also true.

I just find this a bit odd, because existing letters that are already auto-aligned seem to lose their auto-alignment.

What is the reason for this? Have I missed anything here? 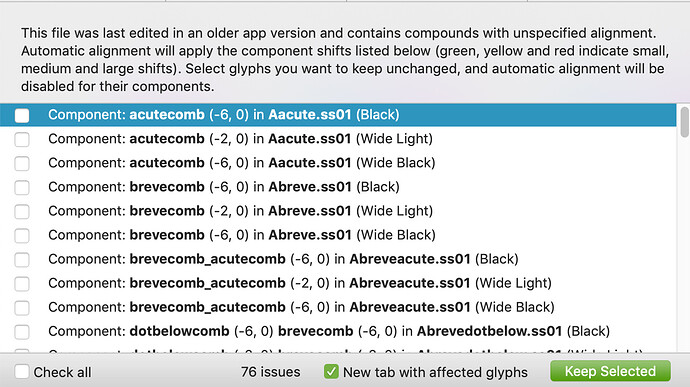 The check is only run with a new version. So that explains why it shows up after an update.

But it should align glyph on saving. So there shouldn’t be more changes when you reopen the file. Could you send me the file?

Thanks for the file. The alignment on export was broken.

But the changes should stop on some point.