Can I use a symlink / symbolic link in the Scripts Folder?

I’m creating a Git repo for random Glyphs scripts, and I’d like to keep that repo in my computer’s general folder for type repositories. However, I’d also like that folder to show up in the Scripts menu of GlyphsApp.

Is it possible to symlink a folder into my Glyphs Scripts folders?

As a specific example, I’d like to symlink this:

To do this, I went into the Glyphs 3/Scripts directory and used ln -s ~/type-repos/arrowtype-glyphs-scripts. This shows as a symlink in Finder, but won’t show up in my GlyphsApp Scripts menu, even when I hold option to Reload Scripts.

Have I missed something?

If this is not yet possible, I hereby submit it as a feature request! I find it to be a very helpful option, particularly if I have project-specific scripts that I want to keep with their given project, but still have access to in my Glyphs app.

Thank you for any insights!

Forgive me if I’m not understanding correctly what symlinking is, but have you tried using aliases? That works for me.

Thanks, @SCarewe, that sounds promising!

How do you make an alias, in this case? I’ve tried one method, but so far it doesn’t seem to be working…

Scripts collections installed from the Plugin Manager are all listed in the Scripts folder using symbolic links, so your approach using ln -s should work.

Can you post screenshots of the Scripts folder in Finder or terminal input/output of your setup?

My scripts folder is currently very simple, as I somewhat recently cleared it out to start over.

Here it is with a symlink (ln -s) to my own scripts repo/folder: 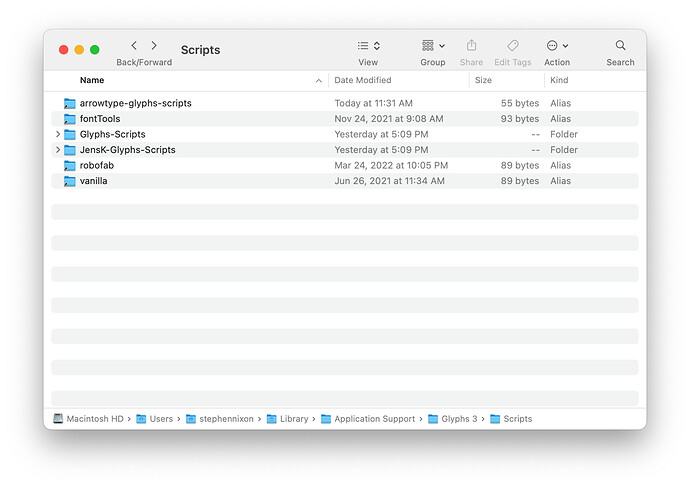 Or here it is with an alias (right click on arrowtype-glyphs-scripts folder in finder to “Make Alias,” then drag that into my Glyphs Scripts folder): 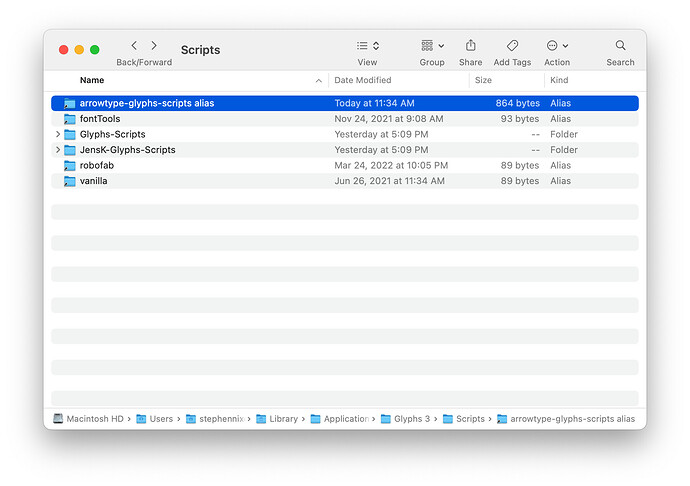 With either approach, this is what the menu looks like, before and after I option click to “Reload Scripts,” including after a restart of Glyphs:

I do see that fontTools, etc, are symlinked in here, and also not available as menu items. I don’t even think they necessarily should show up as menu items, as they are really just there to be imported by other scripts (as far as I know). But, my repo is just intended for Glyphs scripts, so I would definitely hope for it to show up in the menu.

If it’s meaningful, my own repo is verrrry very simple at this point, with exactly one script:

Am I missing something, or could this be a bug in the app? Thanks for any pointers!

Do your scripts show up in the menu if you don’t link but copy your ArrowType scripts folder into the Glyphs Scripts folder?

Ah! It was that simple.

Once I added a MenuTitle, the folder shows up with either (or both) method of symbolic links and aliases:

Thanks for helping me figure that out!