I’m trying to export a font that used to work (back in 2015) but now I’m getting an error about duplicate production names with Glyphs 2 and Glyphs 3 when trying to export. Were these glyphs merged because they aren’t supposed to have different designs? 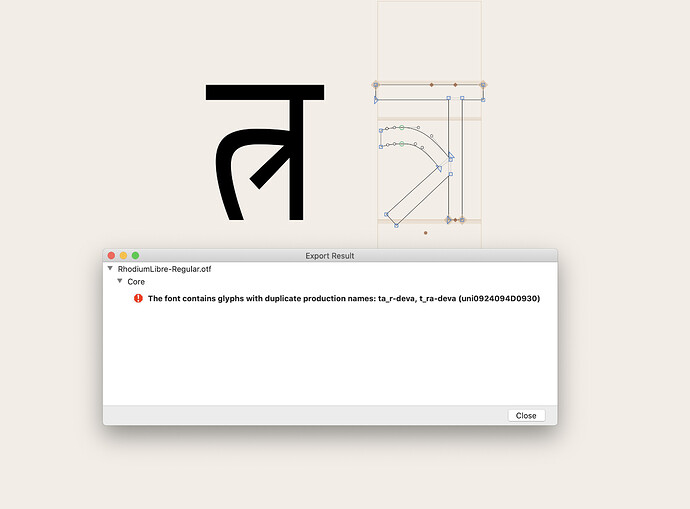 I’ll fix it. For now, manually set the production names for both of them.

What would be the feature code to access either of the two glyphs? Because as far as I know, both would be the same character sequence?

What exactly is the left glyph supposed to represent? It’s not a standard Devanagari conjunct (and the glyph name ta_r-deva seems to indicate an impossible conjunction between ta and a vowelless r, which doesn’t exist). Is it just an alternate for त्र on the right?

The downstroke looks like the regular conjunctive form of ra used with all consonants (क्र, प्र, ज्र, ग्र, etc.), which would make both glyphs combinations of ta and ra, the one on the right being the standard form.

What exactly is the left glyph supposed to represent?

I don’t honestly know. I didn’t develop the character set; this is an old font based on Vesper Libre. I’m just reporting this because it came up when I tried to export the file and thought it might be a problem for someone else.

From my experience with Devanagari (which, admittedly, is purely Sanskrit-based and definitely not expert-level), the left glyph looks like a stylistic variant of the right to me, in which case Glyphs’ warning is correct: they do have the same production name. If the font has stylistic alternates, the left glyph should probably be in one of those as t(a)_ra-deva.ssXX.