I have some problems when I wanna export my variable font:
“Can’t convert to compatible TrueType curves. Glyph ‘S’ is not compatible”

It happen with several glyphs. I corrected the path direction and I has tidy up paths. But nothing changes. How can I fix it?
I really don’t know what to do…

Did you read this: https://glyphsapp.com/tutorials/multiple-masters-part-2-keeping-your-outlines-compatible

No I didn’t read it but I will

When I go there, it said I ever had the latest version.

Can you add a Enforce Compatibility Check parameter to the font? That should highlight the glyphs that are not compatible. If that doesn’t help, could you send me the file?

Yes of course, how can I send it to you?

You can send us the .glyphs file to support (at) (this website without www).

As I said. Adding the Enforce Compatibility Check parameter shows that the “S” is not compatible (you might need to close and open the file to get the update). 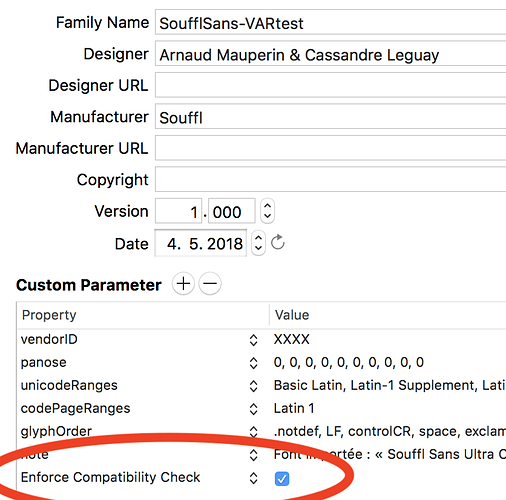 The “petit” “S” has one segment a curve and two missing lines.

Please have a look at his tutorial: https://glyphsapp.com/tutorials/multiple-masters-part-2-keeping-your-outlines-compatible

I am also new to type design and Glyphs, drawing my first hand drawn letters with the pencil tool on a tablet. Found this post while looking up the error message in the title, which I receive when trying to export a hand drawn variable font. I thought I had understood that masters don’t need to play by the compatibility rules if not interpolating. My quick pencil tool sketches don’t come close to same number of nodes, etc. But I had hoped to experiment rendering variable font weights in browsers.

Is it possible to export a variable font without interpolation instances? between hand drawn pencil sketches instances? Any tips for circumventing this error when not intending to interpolate between weights?

Why do you export as variable font when the shapes are not compatible?

I thought I had understood that masters don’t need to play by the compatibility rules if not interpolating.

But I had hoped to experiment rendering variable font weights in browsers.

This is the exact opposite.

Is it possible to export a variable font without interpolation instances?

Stephen Nixon of Arrowtype has a repo on GitHub aiming at variable font preparation. varfont-prep

With some tweaking you can generate a variable font that only contains compatible glyphs and leaving out those that aren’t. (It’s UFO based though, but glyphs can also export UFO files).

Another workaround would be to set all incompatible glyphs to non-exporting if you want to stay in glyphs entirely.

I have an idea now to use my sketchy pencil tool outlines for other weights as background guides to loosely explode out copies of a single weight, which I think should ensure compatibility. Thanks again!