This new interface looks really great, but I still think the language is confusing, 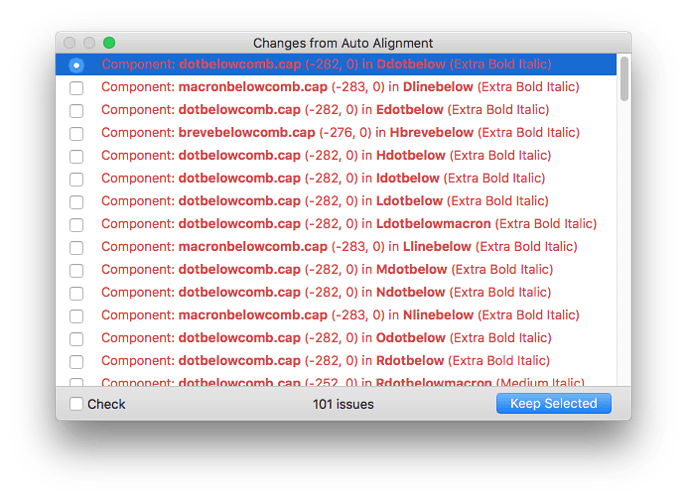 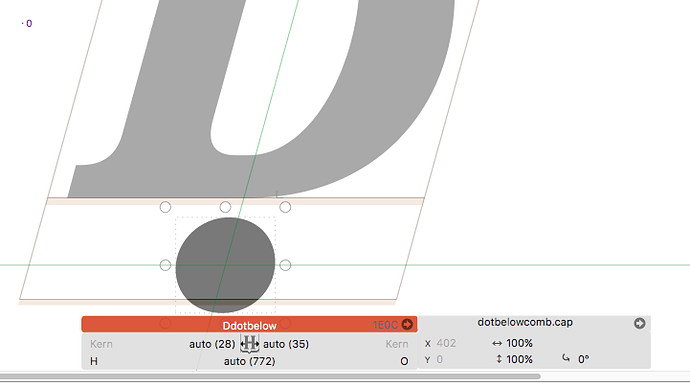 And does checking the item, and pressing “Keep Selected” keep the original or move it to the Automatically Aligned position (0,0).

Wouldn’t it be better to have a visual comparison of the existing and suggested change, side by side? A long list of names of unfamiliar glyphs is going to be hard to figure out.

The list shows the changes applied to the components. So in the first line it says that the dot was moved 282 units to the left.
If you do not check any boxes, the changes will be applied.

The list shows the changes applied to the components. So in the first line it says that the dot was moved 282 units to the left.

Yes, the language is confusing. And the button talks about a non-action (‘keeping’ meaning not changing the selected glyphs). Perhaps better the other way around:

This is the current state: 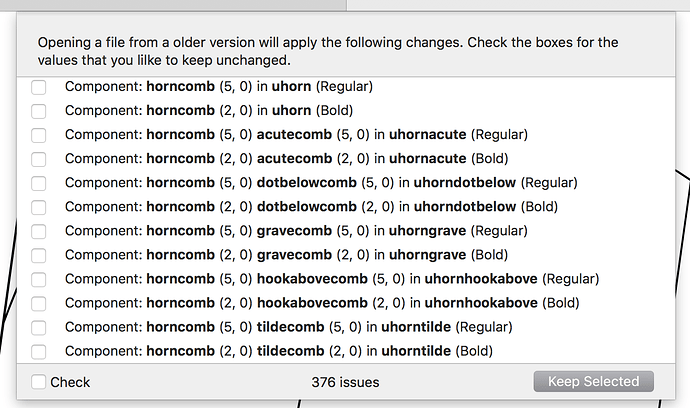 Hi Georg, is it possible to make some kind of output of a list of glyphs at least so I can compare between files.

Opening a file with Glyphs build 1158 that I’d previously worked on with Glyphs 2.4.3, I got this dialog: 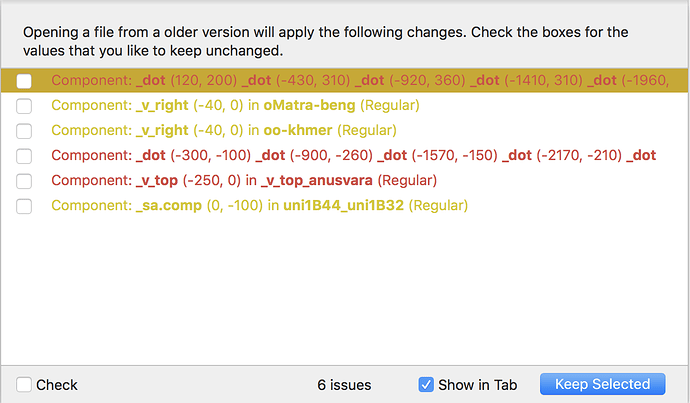 Even after searching for the text of the message and finding this thread, I have no idea what to make of it.

I am also unhappy with the wording. How about this:

Instead of Show in Tab, what about:

Instead of Check, I suggest:

Your proposed wording makes a lot more sense. Adding a reference to the section on Automatic Alignment in the manual (8.1.7) would help too – it’s one of those pieces of magic in Glyphs that I never thought about until it broke with this inscrutable dialog.

Shouldn’t the app opt NOT to change anything by default and not the other way around?
Boxes should be ticked by default.
Why are the changes happening btw?

I want to add one note to this as well:

The other day I let this dialogue open a Tab. I saw a lot of glyphs which didn’t look like they included the last changes I did to them (I’m not talking about the alignment in this case). Since it was a collaborative project, it was already hard to keep track of such. I was really shocked and immediately started to fix those missing changes, just to realise later that all those glyphs where opened with the affected layers (in this case all just backup layers from days ago). I think it would be good to somehow warn or note the user, that this “Show in Tab” shows the affected layers and not necessarily the most recent master layers.

Oh, and maybe for reasons of the wording (also what Norbert put the finger on) I am still afraid to use/apply this dialogue to older fonts that I want to keep working on now.