I want to include unicode in some glyphs like ‘.jp90’, ‘.full’, When I generate fonts from a glyphs file to TTF. glyphs to OTF generate is working, but cmap error occurs when generating with TTF. How do I solve this?
ps. I am making a font of std (Adobe Japan 1-3, not stdN) standard, so I am using it after changing it to a cmap file of jis90 instead of jis2004. (UniJIS-UTF32-H)

Which Unicodes? Is it possible that some of the .full glyphs have the same Unicode as the unsuffixed glyphs? The error message says this about section.full and section.

If you export a CID keyed font, the camp is predefined by resources from Adobe. So basically the Unicode defined in the .glyphs file are ignored.
This is changed in Glyphs 3 where for ttf and cff/CID the cmap is always build from the data in the .glyphs file.

What I want is that Unicode is included in ‘section.full’, and ‘section’ does not include Unicode. Likewise, the glyphs below are ‘Glyphs that do not contain .full and .jp90’ do not contain Unicode, but ‘Glyphs with .full and .jp90’ should have Unicode.
Inside the Glyps file, Only glyphs with ‘.full’, ‘.jp90’ have Unicode.
: section.full, degree.full, plusminus.full, paragraph.full, multiply.full, divide.full + several ‘.jp90’ glyphs

As far as I know, the cmap file that Glyps2 is using now is aligned with jis2004, and it seems to be a problem because the project we are working on needs to generate according to jis90. What needs to be modified to do a generator for jis90?

‘This is changed in Glyphs 3’ mean that the user can generate a TTF as the Unicode defined in the .glyphs file, not by Adobe’s resources? But I want to modify it using Glyphs 2. If I have to touch the resource file and do TTF generator, which file should I modify (to match the jis 90 format)?

The ttf was always using the unicodes as set in the .glyphs file. Only the CFF/CID keyed export changed. 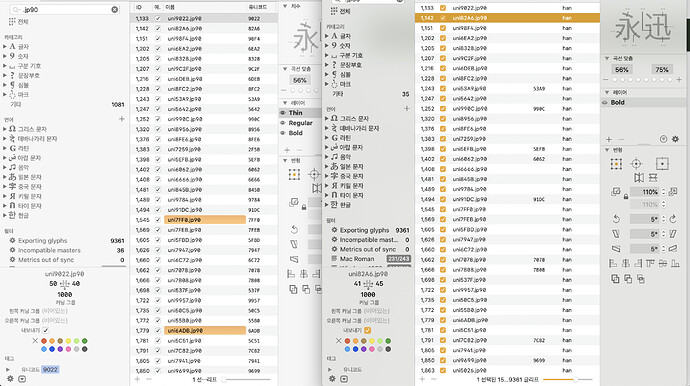 Sent to the message. thanks for your help.

Sorry that it took so long. The problem in Glyphs 2 seems to be a bug in makeOTF, the tool from Adobe that is responsible for generating the cmap table. In Glyphs 3, the file exports fine (there is an error message but that is easy to fix. It needs at least one active instance).