Before anybody points it out, I have indeed read the following thread:

Combination between .calt and .ss01 – possible?

Hello everyone! I’m working on an irregular font with "bouncing" characters. Whenever two equal characters stand in a row (like ii or gg), the contextual alternates feature pops in and replaces one of them with an alternative (.alt) version of that letter. So far, so good. But now, I would like to create a second style within the same font. It should have reduced bouncing for better legibility. It should be up to the user to choose between the headline- or the textversion. In other words, I’…

All that I could discern after having read the thread above is that .calt cannot come after .ss01, which I have found when testing the font I am working on.

I hope this all makes sense. Can post images to clarify.
What might be the solution for this?

There is a tutorial for this. Search for ‘German’ on the tutorials page.

Hi @mekkablue – thank you for your reply. 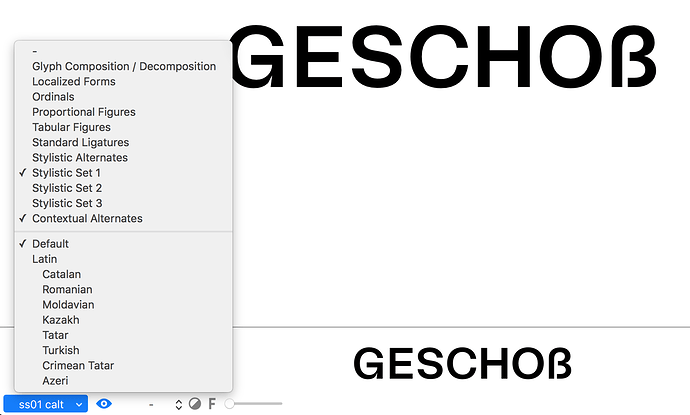 The calt code only replaces germandbls (not germandbls.ss01) with germandbls.calt. You will either have to adapt it to also include the ss01 variant or reorder the features so calt kicks in before ss01.

Do you have a germandbls.ss01.calt in the font? It is not reflected in the code. How do you expect it to appear if you do not tell it to?

I should probably have mentioned, I included two lines of code, as below:

this returns the following error:

I have a feeling that this is covered in the thread I originally linked, however I cannot seem to think of a way to circumvent this issue without changing the naming conventions for the stylistic set (so as to avoid the clash between .ss01 and .calt). I’m also wondering if I need to define a different class for the @Uppercase to specify that Stylistic Set 1 has been turned on.

The tick mark after ss01 in the first line is not a straight dumb quote ' but a curly single quote ’. Did you write this in a different app and paste it in Glyphs? Or perhaps update to the latest 2.4.2 beta, which should treat smart quotes as dumb quotes.

This is by far the most embarrassed I’ve been online haha. Thank you for your help, @mekkablue , that was indeed the issue. I was generating the rest of the script simply by copying and pasting the first two lines, however it treated everything between the 's as a quote.