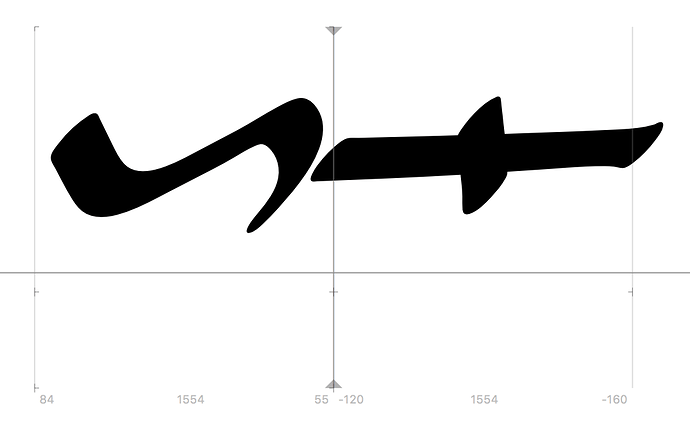 So, in short, I’m looking for a way to contextually affect the vertical positioning of symbols. I’m having no problem contextually affecting the kerning to get the two symbols aligned over each other, but I’m not having any success with vertical positioning. I’ve tried anchors, but as far as I can tell from the tutorials, they are only programmed to work with accents and diacritics, and not with just any glyphs.

Anchors would be the perfect solution, though, as I could position symbols anywhere, regardless of their relative widths which will vary greatly from symbol to symbol. Is there any way to do this?

I’m trying to avoid creating component glyphs for both top and bottom positioning, because as I’m already dealing with thousands of symbols, having two more variants of each would start to make for an unmanageable file size (this will primarily be used as a webfont in an online editor).

Any help would be greatly appreciated!!

There is an option to position letters with anchors. It is used for cursive positioning in Arabic. I’m not sure if it works with other scripts.

Can you post a screenshot of the final, desired positioning? And add a few more letters as context.

Thank you for your quick reply. Sorry for not being more specific. Here are some screenshots:

I did try to position things like that but never got it to work reliably.

One save way to do it would be to build ligatures. How many combinations are there? Or maybe alternate glyphs with different position of the shapes?

The potential combinations are theoretically endless, as the symbols in this context are no different than a modern alphabet. I’m already using ligatures for the most common combinations (ligatures the Egyptians themselves used when writing, interestingly enough).

The easiest solution would be creating alternate glyphs for the top position and for the bottom position (using the originals as components) and then positioning those with custom kerning. But since I have five alternates for each glyph, that’s going to make for a much larger file than I’d hoped. On the plus side, this would give me much more control over each individual glyph if any exceptions present themselves.

So you agree, that the best bet would be creating alternate glyphs for the top and bottom positions?

This has been very helpful, thank you.

Hi Carl,
I’ve been looking for a hieratic font and found this thread. Has this project been finished?