I have to edit a font (imported form OTF) and I see a lot of glyphs with name like uniXXXX. It’s possible that Glyphs convert those automagically to the corresponding naming convention? 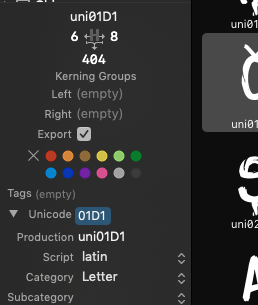 One other detail: before using Glyph > Update Glyph Info, verify that Font Info > Other > Use custom naming is unchecked. By default, names from an imported OTF are kept, as is.

Is there any way to change glyph names after opening also in feature code and classes?

Feature code and classes is not so easy. You could open the file again and only copy them over to you existing file.