Hi all. I am trying to make a variable font and the tutorial doesn’t match what I see in Glyphs. I create a new font, I add the axes in the Font Info, but adding a master does not give me the “Axes Coordinates” field.

Aha, yes, that does it. Great, thank you.

(Though opening a font I previously worked on to be the source of my variable font got messed up in the beta: a window appeared with a whole bunch of component glyphs listed in red text that said something like “these glyphs will be updated” but gave no indication of what it was going to do and now a whole bunch of accents are misaligned. :shrug: )

The dialog says exactly what it is going to do. It is a little complicated in the formulation, but honest nonetheless.

It helps enforce auto alignment. You can use anchors to prevent the jumping.

I dunno, I think it’s a little opaque. 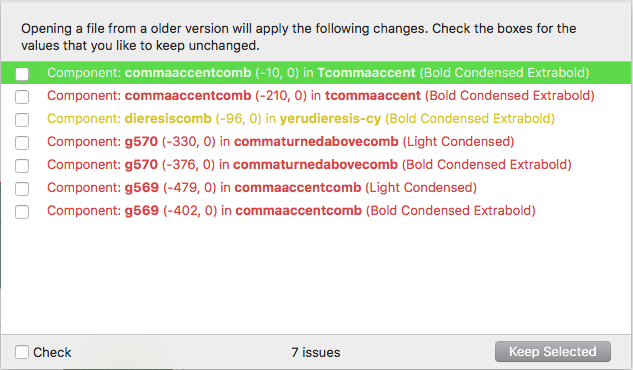 It says it is going to apply the following changes, but it doesn’t actually say what those changes are. I see some changes happening to the components of a few glyphs, but…what exactly? And what’s the difference between red and yellow text?

The changes are listed, each line is a change: a component named g569 is moved 479 units to the left in the Light Condensed layer of gcommaaccent, for instance.