Different open type feature for one of the masters

Hello, I’m working on a project with multiple masters. I have calt substitutions for dealing with some clashing pairs. However, these clashes do not occur in all weights. I was wondering if it is possible to slightly adjust the calt for one of the masters. Thank you for the help!

You can adjust it for each instance. Add a “Replace Feature” parameter.

Thank you Georg, I’ll give that a try.

Is there a documentation regarding how to use the “Replace Feature” parameter? I was able to execute the “Remove Feature” but when I added a feature on the Replace Feature “value” box/pop-up, it did not work. I don’t know what format is expected and was not able to locate the documentation for it.

I actually want to keep the same features but maybe change the classes in some of the instances for example:

It would be helpful to be able to change what’s in the classa for each instance.

I really appreciate the help!

Try the Replace Class parameter then.

You can either replace or remove a feature. Not both.

Rainer, thanks for the info. I actually did not stack the two parameters. When I add a Replace Feature parameter, I wasn’t able to figure out what format the large input box is expecting me to enter in. I tried pasting the feature code that I want, as it would appear in the calt section of the features panel in the Glyphs Information window, but that does not work. What am I doing wrong? 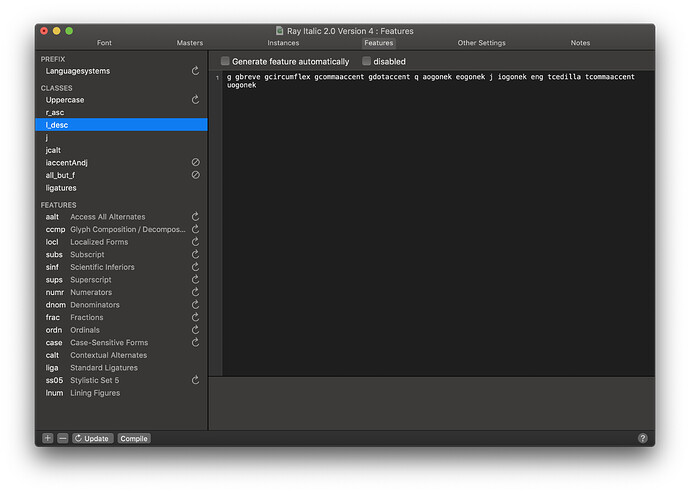 In order to do this, I followed the below step. 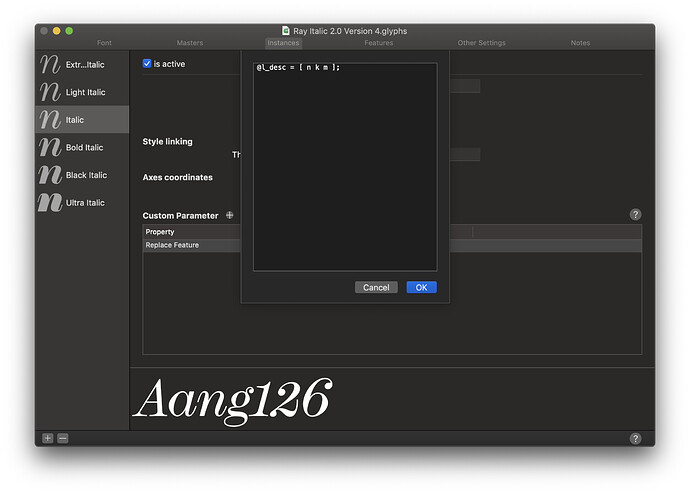 During export I get this error:

Can you tell me what I am doing wrong here?

You are trying to replace a class, not a feature. You need to use the “Replace Class” parameter. The same syntax: classname; a b c

Thanks Georg, did not see that parameter, I am just realizing Rainer gave me the answer last week, I misread his post, apologies