I’m working on a typeface with many different variables, and it is starting to become tiresome to enter the same data manually for each affected letter. Since many letters share the same data, it would be nifty to copy-paste the entire table, thus saving some time.

What data do you mean?

The intermediate and alternative master tables 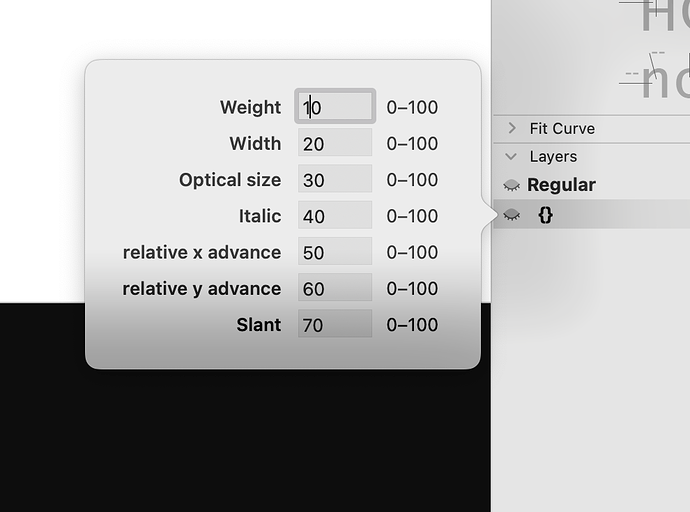 Are you sure you don’t need some real masters for this setup?

Yes, I am certain. Oh, and the attached image is just to state an example.

Select the layer where you want to copy the axis settings and run this in the Macro panel:

This stores a copy of the axis settings of the current layer. Then, select all glyph layers where you want to apply the same axis settings and run the following code:

You can also put these snippets into scripts and run them with a keyboard shortcut.

Interesting! I will check it out.

Too bad, the second part of the macro crashes my Glyphs 3.

I wrote these scripts without much testing and handled only Alternate layers, but not Intermediate layers. Here is a more complete solution that handles both:

Thank you! @FlorianPircher This seems to be woking, however, I can only reuse the attribute for one layer at the time. If the target layers are more than one, only the first one will receive the attributes.
How would go about creating a snippet for Glyphs? Automator?

If the target layers are more than one, only the first one will receive the attributes.

It’s difficult to select multiple Alternate/Intermediate layers at the same time since in Font View only master layers can be selected. It’s probably best to create a script.

Creating scripts will involve less steps in a future release of Glyphs :​)

This will definitely save some time! Thank you @FlorianPircher for giving me a crash course in creating custom scripts.