A simple but incredibly useful feature request. Particularly for script typefaces (but I’m sure other applications). From what I can see this has been requested before, but only in passing amongst other topics.

I would like to be able to tick a box (in Prefs or wherever makes sense) “Constrain dragging of handles to italic angle” or words to that effect. When ticked, dragging handles with modifier keys (such as shift) constrains the handle/node/path to the italic angle set in Font Info, rather than to 90 degrees.

I’m currently on my phone so not able to provide screenshots for context, hope this is clear enough.

Does anyone see the value in this? It would make my life so much easier!

Update: I can see myself needing to switch back and forth between these ‘modes’ quite frequently (and wanting an indicator of which mode I was currently in) so a solution that makes this fairly quick and easy would be nice, however I appreciate a whole button taking up more UI space isn’t desirable.

I think I can see the answer being to create a plugin script. Anyone want to volunteer?

Does anyone see the value in this?

Only partially. In a true italic there are a number of glyphs, primarily lowercase, that will need to be slightly off the prescribed angle to optically look correct.

The movement of paths with modifier keys cannot be scripted. What I can do with script, however, is that I give you a small window which has a text box and “Move” button. In the text box you type the Y movement value, and the selected path moves up or down by that amount when you click the button, but at the same time moves horizontally, using the italic angle. Would that sound useful to you?

I’d address this request in a different way which may make it useful further to Italic and oblique styles;
It is simply to enable square nodes with single handle to be constrained with the connected line before.
In some cases I work around it by adding a guidelime between the corresponding two nodes; 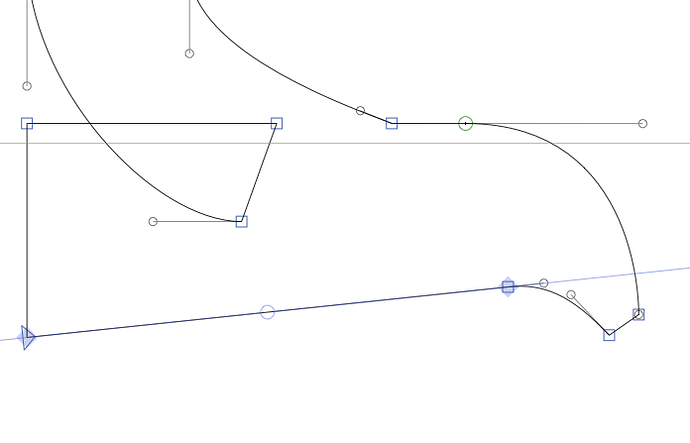 Or by converting the node to circular when dragging the other handle by the line would define the smooth curve needed. 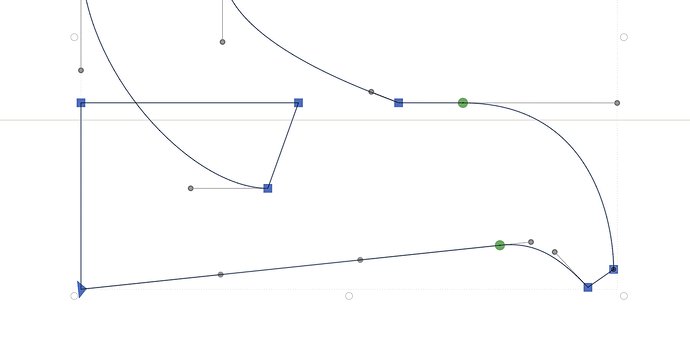 Previous users of Macromedia FreeHand remember a third sort of nodes which was a triangle; that supplied the exact constrained output by handle.

You do not need to add the curve handles on the left side. You only need to turn the blue node into green (select and press Return). Then it will work like FreeHand’s triangle node, provided there is a line segment on one side, and a handle on the other.

Alternatively, moving any handle with the Option key held down locks its angle.