I run some tests with FontBakery for Adobe and I don’t quite understand this: 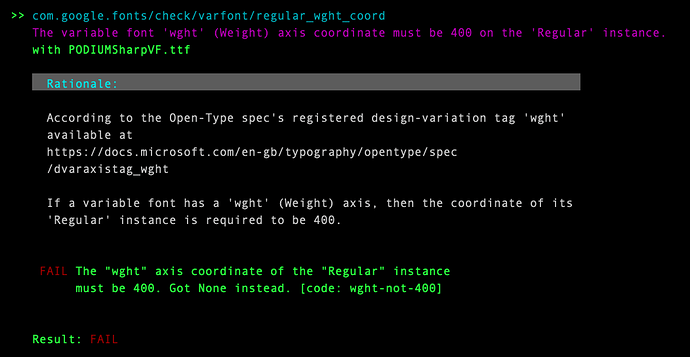 While I generate VF font, there are no any instances. How can I set this value of 400 to the “Regular”? 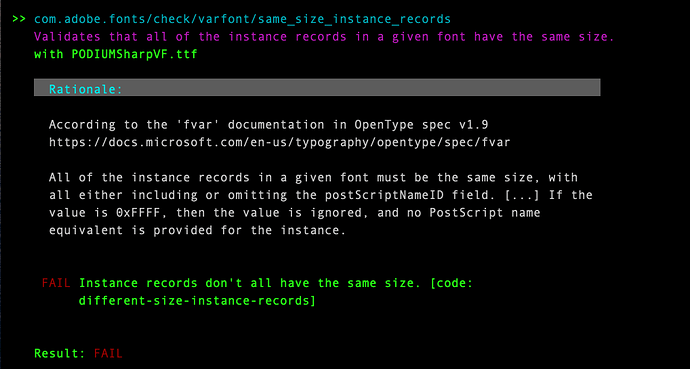 Again, there are no instances so how they should have the same size?

And the last one:

I don’t know how to solve these. Please, help.

I’m having the same problems. But I can say that I could fix some issues adding a custom parameter “Axis Location” on each instances. I don’t know if is the correct method.

Some fontbakery checks are rather specific for a certain font vendor, in this case Google, and not valid universally, so you have to decide if they apply to your case.

If you don’t have an instance called “Regular”, you can ignore the first error message.

The last check seems relevant though; per the OpenType spec, the values of the weight axis should range from 1 to 1000 maximum (usually not that full range, but corresponding to the weights your font supports), so a default value of 0.0 for the weight axis shouldn’t happen. Adding axis locations as @beppeartz suggested should solve that.

I’m not sure how to influence the PostScript naming thing from within Glyphs.

I’ll have a look at the instance records.

You need to add the axis location parameters.

Ok guys, many thanks. I got rid of these errors, when I added instances: 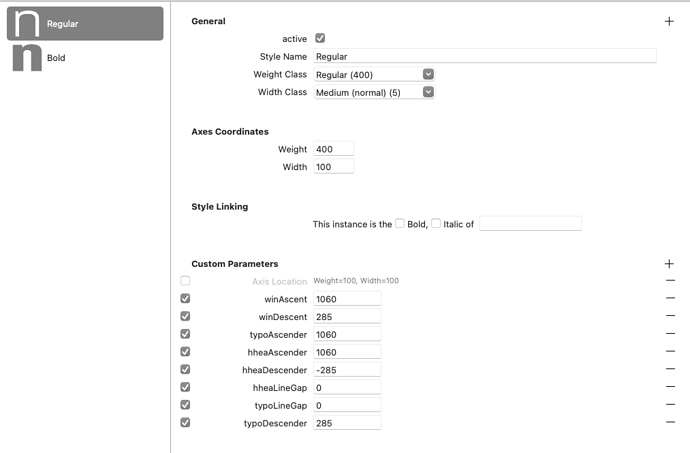 but more errors keep popping up… 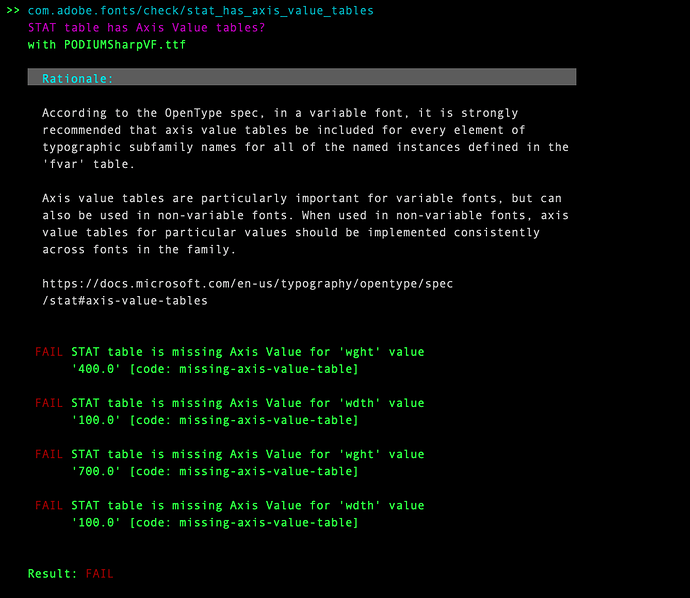 You need more instances at all corners of the design space.

I have the same problem, fontbakery gives a FAIL for a variable font (45 styles):

…and so on for all instances. Also it gives another FAIL for:

… It continues for all instances also.

How do I fix this?

Some of the problems I might need to fix. It is at the very top of my list.

I’ve hit this roadblock as well. Thanks for looking into it!

I had to import glyphs files to Fontlab to export VF that could pass validation. Such a nightmare

Oh please God not that. I hope I won’t have to go down that road! Is there any chance we get an update with this fix soon @GeorgSeifert ?

Is there a way to manually fix tihs at the moment?

I finally worked on this. And I think I improved it a bit. Can you send me some example file for testing?

awesome! sent you a file.

Some tips gathered for max compatibility with current implementations in third-party apps:

@frankrolf I have an issue with some of the checks for an italic OTVAR:

I assume this is the fvar.NamedInstance.subfamilyNameID for the instance at wght=400. CMIIW but this check is impossible to fulfil if you have a separate Italic file with a wght axis (like Example 5 on the STAT spec page).

name IDs 1 and 16 must be the same as in the Roman, otherwise it will not be considered the same family. The tricky part is that I have found that nameID 25 must be unique per file, otherwise InDesign misbehaves. Hence, in an Italic file, the composed postscriptNameIDs will contain the Italic indicator before the dash, which makes it impossible to make postscriptNameID the same as nameID 6.

Update: had a type about subfamilyNameID, fixed it.

See the changes I made for SS4:

The issue is that “Roman” and “Regular” are different (therefore pass the FB test), while this distinction is impossible for the Italic slope.

In current projects, I am forcing the creation of a nameID17 by setting the VF style name to “Dummy” (which is different from “Italic”), and then post-process the file with fontTools, to insert the style name of the default instance.
(The “Dummy” workaround is not necessary for SS4, because that project has an intermediate master at the “Regular Italic” weight, therefore the default is “Italic”.)

It is not elegant, but it works.

More experimentation. So, an update:

Changing the fvar instance entry of the regular-weight instance ‘Italic’ from this:

… seems to work in InDesign, including style linking through Cmd-Shift-B/I. However, it has a different postscriptName structure than all the other instances. So I am kind of weary about third-party app compatibility.

In the meantime, I realized that my “Dummy” workflow + post-processing was unnecessary.
The current setup looks like this: