I have a few fonts produced and finalized in Glyphs 2, when I open them in Glyphs 3 I get a myriad of auto alignment errors. Why is this happening? I’m confused and frustrated about having to fix over 100 alignment errors, just to move the products to the new Glyphs. :-/ 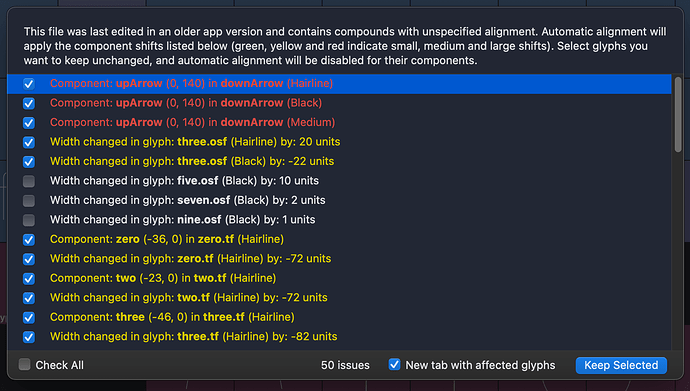 This will regularly happen, even between different versions of Glyphs 3. As the description says, the components are missing alignment information (for whatever reason). I have found this to be an issue in composites a lot of the time in Glyphs 3, as in, I change the metrics of a component, but don’t open the glyphs it’s used in, so they aren’t updated. Upon re-opening the file in a newer version, the composites return the error above. Just enabling automatic alignment for all masters (eweracs scripts contain a script for that) fixes that.

Generally speaking, this is one of the main reasons why using components without automatic alignment is problematic.

On a side note: the description speaks of “green”, but I think it means white/black (depending on Dark Mode). Maybe this should be fixed (even though nobody actually reads the very confusing text, probably).

Am I understanding correctly that this is expected behavior? @mekkablue

If the components are missing alignment information, why do I not get the dialogue when I open the files in G2?

The algorithm that considers that and how to align components changes once in a while (specially there were some changes between version 2 and 3). When you open a file in a different version, Glyphs runs the auto alignments on all glyphs and checks if something has changed and gives you a chance to keep the positioning as it was stored in the file.