I know there is a lot of topics about this on the Forum, and it is doing a good job of confusing me.
should the glyphs in Glyphs be

or ignore Germandbls and just include

or ignore Germandbls and just include

For what it’s worth, option 3 is what the tutorial produces.

Only option 3 is ok. All others are wrong.

Anyone else having this problem?

These are issues with the applications. The font can do nothing about that.

Thanks! So if I understand correctly with the Germandbls in my calt feature I can only acces that by typing ß in a string of uppercase characters?

Yes. Also, it would be GROẞARTIG if it had a Unicode value (U+1E9E).

It has! But not germandbls.calt. (is that one even still needed?)

See the note in the tutorial:

Some type designers and font engineers, including me [@mekkablue], find this differentiation between the lowercase .calt variant and the uppercase character superfluous. In practice, it does not seem to matter anymore. So, you can just take sub germandbls by Germandbls; instead, and get away without duplicating the glyph.

I agree, the .calt is not needed.

Yes. Make sure your ‘c2sc’ feature is placed after ‘calt’ so that the Germandbls is already present in the glyph stream.

It works in both Glyphs 2 and 3 for me. Could you post a screenshot of your feature tab? 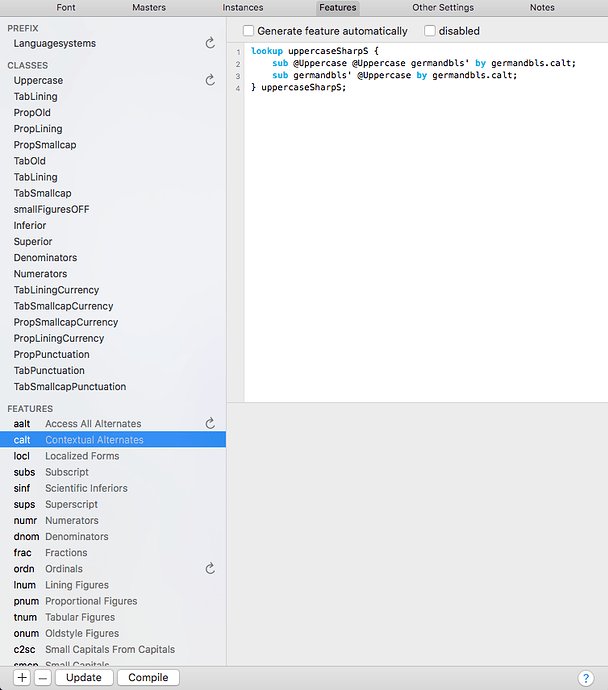 Even with germandbls.calt removed from the feature I can’t get it to work.
Typing ẞ and then applying All Small Caps in InDesign still gives me SS in small caps.

Sorry, this is InDesign’s fault again.

Indesign does overwrite the ß for small caps and All Caps. You can’t do anything with features to change that.

In what applications does this all work?

Many, but Adobe is of course a particularly prominent exception to the norm.