For some reasons, Glyphs 3 appears to perform worse than Glyphs 2.6.5. I open and edit a same .glyphs file on 2 apps and notice that Glyphs 2 is much faster…

Can you send me that .glyphs file? And what plugins do you have installed?

@GeorgSeifert RMX 1.1.7, Show Stem Thickness, Show Top & Bottom & Show Kerning Values.
Could I have your email so I can email the file?

same for me. G3 UI looks much slower than G2

Can you send a screencast of the specific situation?

Same here,
Glyphs 3 is really slow when I use the Fit Curve panel. It starts fine enough but one to two hours later I have to restart the program.

Even Red Arrows turned on slows down preview in G3 when dragging around or zooming in-out.

I have the same problem with the Fit Curve panel, very quickly actually.

A few other issues:

Is it possible to select all glyphs that I gave the same color in the glyph menu, in a single action, instead of having to select them one by one? I like to use the color for glyphs with similar features, and it would be very time-saving when I’d like to make adjustments to all of them.

I finally found the issue with the Fit Curve panel and fixed it.

That change was a long standing user request. The right button use scale (with whatever percentage is in the field) and the left button is reverse scale. So if you put in 50% and hit the right button, the selection will be halve the size (to get the effect as it was in Glyphs 2, you need to add 100% to the value).

When I try to adjust kerning in the info-bar (edit view) with the arrow-keys, it immediately confirms the value after one hit (meaning; I have to click (reactivate) the little frame every time I make a single increment-adjustment). This also sometimes happens with the values of the spacing (there, it was also an issue in Glyphs 2).
I know you can adjust the spacing with ctrl & cmd + arrow keys, but not when you’re working on the path itself.

that is fixed in the Cutting edge version.

Glyphs 3 is much more slower than 2.6 when I paste complex drawings from Illustrator.
Also when I work with glyphs with a lot of nodes. In fact is almost non usable in this situations.
I add a screen of the drawing. 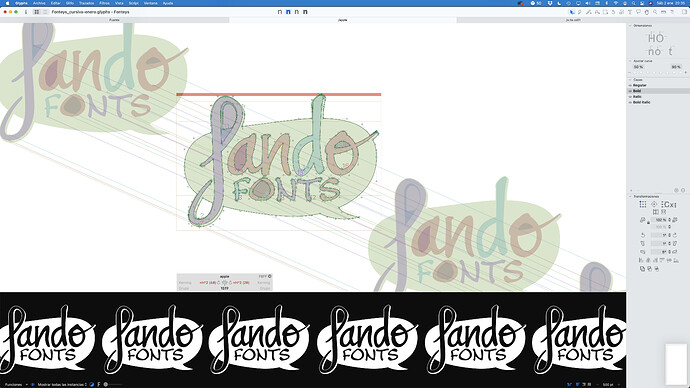 Can you start Glyphs without plugins (hold down Option + Shift when you start the app) and see if that makes a difference?

Yes, it makes a difference.
I tried to copy the logo of the image from Illustrator. When I tried it yesterday Glyphs 3 was blocked with the color wheel. Now at least I can copy-paste, but the performance is still too slow. Glyphs 3 lags a lot when I move the logo or change a node. I tried too in Glyphs 2.6 with plugins and the performance is way better.

The plugins are slower because of changes in the python environment. I’m in contact with the python developers about that.

I seem to also be suffering from a little slow-down. Selecting nodes is no longer instant but takes a moment to highlight. I don’t have other apps open at the time so Glyphs isn’t competing with anything. I do have three glyph files open. Restarting with just one open seems faster but I’m working on my italic while keeping an eye on my roman and a slanted version.

Can you start the app without plugins by holding down the Option + Shift key when you start Glyphs?

Yes, much better. OK I see the post above relates to me too.
Thanks.