I installed the trial version of Glyphs 3, as I am working with version 2 and considered upgrading at the end of the evaluation period. However when trying to open a project made in version 2, Glyphs 3 says that the document cannot be opened, giving the error message “No semicolon at the end of the string at line: 32802”.

Does anyone know how I can solve this problem?

Could you send me that .glyphs file?

You had an invalid metrics key that Glyphs 2 was being able to cope with. Open the files in a code editor (TestMate, Sublime Text, BBEdit …) and goto the line mentioned in the error message. Then look a few lines before and you’ll see a metrics key like this: = "o""; remove the duplicate closing quote and it will work again.

Thank you! I will try it.

This is also happening to me. Can’t open a Glyphs 2 document on Glyphs 3. Could you help me?

Please send me the file.

You should get an error message: “No semicolon at the end of the string at line: 176601”. You can open the file in a text editor and go to that line. There you see that there are some corrupted nodes. Glyphs 2 seems to be fine with it, Glyphs 3 trips over them (I see if I can prevent). But you can edit the file by deleting those nodes or giving them a valid node type like “LINE” and then check that outline.

I’m with it opened in TextMate. This is part of my window there. What should I delete or change here? 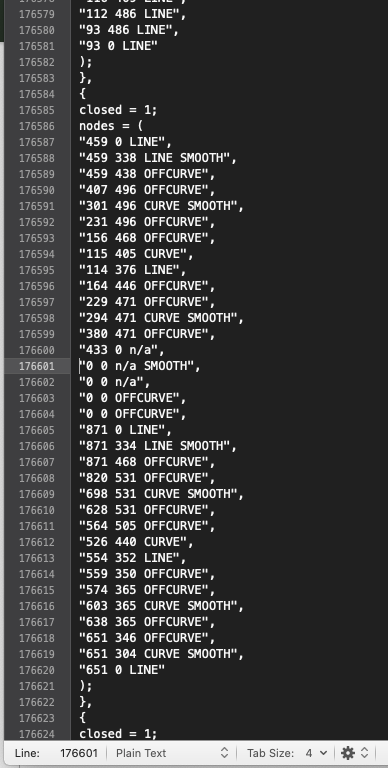 The lines with n/a

Ok, I’ll try that! Thank you so much, Georg!

Is it possible to know which glyph is the one with the problem by looking at this code?

You can search for “glyphname” and search backwards form that location. It is the second layer in the “m”. At least that looks strange after I fixed those nodes.

And you really need to close some tabs. 170 are too many.

Suddenly I can’t open the font I have many many hours into. It has a lot of symbols and proprietary so I can’t share the file. It won’t open and says “No semicolon at the end of the string at line: 2”

Here are the first three lines of the .glyphs file I’m trying to open (Glyphs 3):

Try changing it to the following: