Today I had to switch back to Glyphs 2, because kerning groups disappear from glyphs in Glyphs 3, but show up again at Glyphs 2.
Driving me nuts and I have to deliver a project in some days.

What exactly happens? Kerning groups are not displayed anymore in the glyph info panel? This one here: 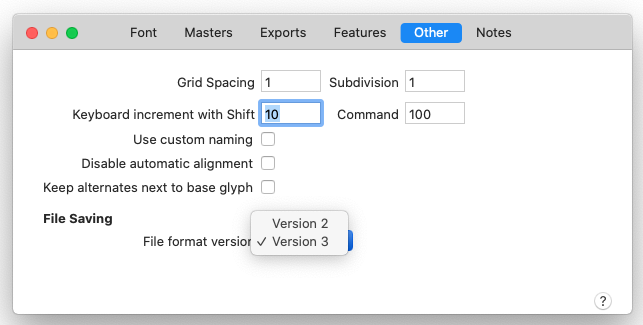 (I took the liberty and moved this post into a new thread since it was off-topic in the other thread.)

I had the same problem, I thought it was me who accidentally deleted right kerning groups.
I also had a problem with periods in kerning group names: I could not assign R.ss01 kerning group name, I hade to use Rss01 instead. Group name with period in it was ignored when assigned to some glyphs, but some glyphs kept that group name. Very strange, I didn’t find out the pattern. (I eventually assigned my groups in G2.) I will check the latest build now.

Hello! Similar Problem here. I could not insert a group for some Glyphs. It disappears instantly or was gone after I visited an other glyph. It was unpredictable. Than I discovered that it only happened after I tried to change a whole bunch of glyphs. After restarting the program it works again but I have to change every glyph one by one. With hundreds of diacritics a lot of clicking…