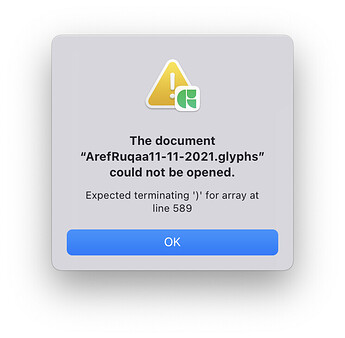 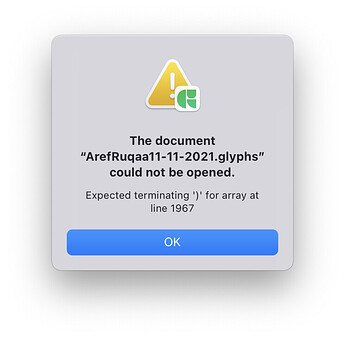 If Glyphs 3 can be less strict that would be greet, but at least be able to open files saved from Glyphs 2.

I was able to open the file in Glyphs 3 after correcting the panose custom parameter (FontLab was adding quoted semicolons instead of the zeros and Glyphs 2 happily opened it and unquoted the semicolons).

That is wrong enough plist that Glyphs 3 is right in refusing to open it. The quotes semicolons are not the problem, the missing commas after each entry are.

The parser in Glyphs 3 is a bit more strict but also much more resilient to differences in white space. e.g. you could put all those pansose values in one line (with commas, of cause).

Understood. I’m concerned the fact that Glyphs 2 wrote a file that Glyphs 3 can’t open (the rest is FL 7 bug and I’m OK with Glyphs not wanting to support such broken files).

I didn’t look at the file in Glyphs 2, yet. I’ll check that.

I improved it a bit that it will write correct plist but the underlying problem is that FL is not writing a correct file. In some instances, it ends the line with a semicolon when it should use a comma (for entries in a list).

Thanks. I’m trying to get FontLab to fix their output as well.