Glyphs is running slower on a 5K screen

Can you uninstall and reinstall the plug-in in Window > Plugin Manager, restart the app, and see if it gets any better?

It works fine on my 5K iMac. I could not test the LG, yet.

Even though I remove the plugin via Plugin Manager, it is still visible inside the Preferences > Addons. When revealing it in Finder, it’s not there, only the two other. Seems something weird is going on! 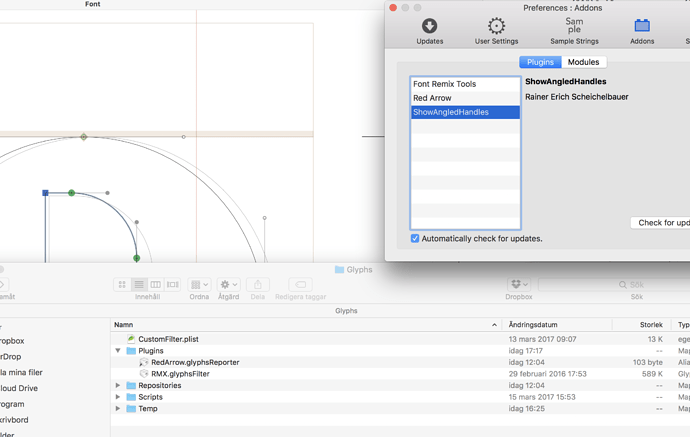 switching glyphs (fn+arrow) works slower for me since a couple of updates (and don’t have a 5K screen). Maybe related?

Did you (the Glyphs team) recently add a print "___" reporter or something similar anywhere? I just updated the cutting edge and it prints all active reporters to the macro. I searched all my plugins if that command is in there. Nothing found. Also when I remove all plugins from the Plugins and Repositories folders. The printing occurs as soon as I add and activate only one plugin (which hasn’t any printcommands. It slows Glyphs down.

Don’t want to blame anyone, but I cannot help myself to find the cause.

Edit:
I checked with an older Glyphs Version and this is not an issue there.
Summary: 996 is printing all the time, and hence slow. 990 is OK.

I can confirm that this problem has existed for a least a month. I assumed it was just rough code in the cutting edge versions and I never bothered to post about it. I’m using a 5k iMac, 3.2 GHz Intel Core i5, 16 gigs of RAM, with the latest versions of Mac OS.

I have a look at the performance issue.
What plugins do you have installed and active?

It is not Speedpunk, right? I get this in my Macro window, but only once per session, no slowdowns:

Go into the Edit View (or Text View) and turn on something like “Show Red Arrows” or “Show Angled Handles” and then look at the Macro Window. I see lines appearing like:

Each time you toggle between the Macro Window (Opt-Cmd-M) and the Edit view, more similar lines will appear while the plugins are active.

That is a remnant of some debugging. I removed it.

I have now removed all plugins except RMX (which I really, really need) and I still experience some sort of latency when using Glyphs. It’s small issues, but I feel it’s still there. If I compare to other apps I experience them more quick in response.

What exactly is slow? Drawing is edit view? The font view?

I think everything is slow. From a little delay when pressing buttons (like flip, increase etc) to drawing. To be honest, I’m not sure if it’s Glyphs or some Wacom interaction with Glyphs, or the 5K screen interaction with Glyphs, but something happens when I connect my new MacBook Pro to a 5K screen and my Wacom that slows stuff up and make working a bit irritating sometimes. I will try to find some more specifics around this, but it’s hard because have a heavy workload at the moment.

What happens if you remove the Wacom (and maybe even the driver)?

Ok, I think it must be some Wacom problem. If I just switch to the mouse it goes faster.

Remember, this is all very subtle, but it’s like the Wacom pen give a slight delay before reacting, and this only happens when I’m using Glyphs, I think.

Could it be possible that Glyphs react like this to Wacom pens?

I have got a Wacom for testing, I just didn’t found time to try…

I haven’t had any performance issues with the most recent versions of Glyphs.