I’m new to the programme seeking a simpler OFT experience from Fontforge. I am finding it impossible to edit a path and the tools do not operate as expected or as the Handbook outlines. I am experiencing some weird and frustrating problems.

When it is working correctly, and it doesn’t always, the pen tool only produces corner points and there is no way to change the point to a curve. Double click does not work to change them, nor does hitting ‘return’ as the manual states. 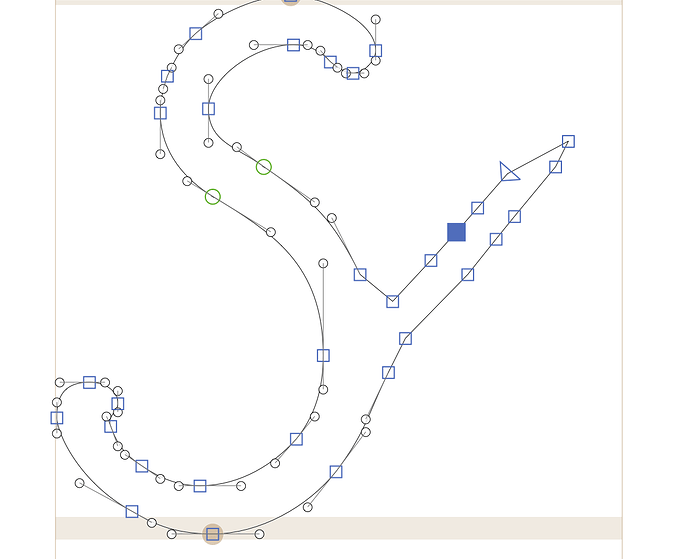 On reopening the font Glyphs Mini all the orginal round points have been converted to square points. They were round when first opened from the save as. Those that were round points created in Fontforge, before the original save as, can be changed back to round ones as expected in GM. Newly added ones in GM cannot be changed.

Sometimes the pen tool does not create a point at all, instead it cuts the line, just as the knife tool should. See image below the blue triangles were made with the pen tool double clicking between the blue squares. 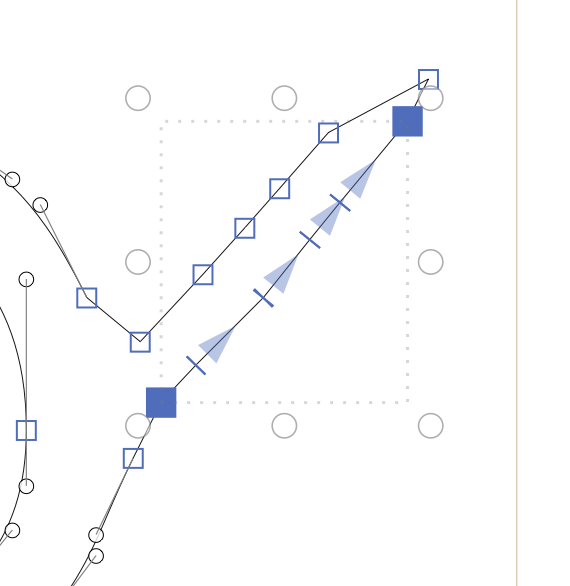 To change a line to a curve, click the line segment with the Option key pressed.
Double clicking a node or hitting Enter when it is selected makes it a smooth node. That doesn’t make sense for a node between two line segment.

Consider watching the short Drawing Paths video on the Get Started page.

There may be a semantic misunderstanding. A segment can be a curve segment or a line segment. Nodes delimit the segments.

Newly added ones in GM cannot be changed.

The green circle/blue square status determines how adjacent handles behave. Green means that the handle will align itself with the opposing point (be it a handle or a node), blue means the orientation of the adjacent handle is completely free. Therefore, a node can only be turned green if at least one of the adjacent segments is a curve segment.

Did you open a compiled OTF? Try Glyph > Tidy Up Paths.

Technically this is not ‘reopening’, rather ‘reverse engineering’, ‘decompiling’, or ‘importing’. The added green/blue information is only stored in the .glyphs file, and cannot be saved in a compiled OpenType font. The status of the point only determines the handle behaviour in Glyphs, it has no effect on the outline otherwise. (I assume FontForge does something similar in its own saving file format, but not in the OpenType export.)

Sometimes the pen tool does not create a point at all, instead it cuts the line,

When you click on an existing node, the Draw tool (shortcut P) breaks the path. Why should it create a new point when there already is a point?

Or did you mean to edit the existing point? Then consider switching to the Select tool (shortcut V).

Many thanks for the quick replies; which solved many of my misunderstandings.

I’ve been drawing with Bezier curves for a long time However, drawing a curved segment in GM remains a mystery…Having watched the Drawing Paths video (which incidentally is so fast you can’t really capture which instruction goes where) - and trying to emulate the demonstration ‘Click click then drag’ to get a curved segment, I can only get a mirror of the curve the demonstrator made ie. if I drag down the curved line goes up and away from the destination point…I’d have to think in reverse to use it. Maybe it’s because I am working with a trackpad - though I don’t see how this would matter.

Anyway - sincere thanks for trying to help - don’t worry, you’ll have more important matters to attend than my newbie ones. I’ll either figure it out or I won’t. Might have to persevere with the complexities of GSUBs in Fontforge for my OFT needs.

Hint: For a curved segment don’t click-click&drag, but rather click&drag-click&drag. That way you define both handles of the curve.

Thanks for time and the help - finally got it now…just a little adjustment in thinking and technique needed on my part.

No prob. Some paradigms are indeed different than what other software does, and that takes a little effort to get used to. Once you got the hang of it though, you will not want to switch anymore.