I have noticed some strange behavior in Hebrew kerning:
It seems like the kern value between a hebrew character and a quote is being altered, if a space follows.
In the example, the first line ends with a return : correct kerning between last character and quote.
The second line ends with a space: additional kerning has been applied.

Does anyone know, if this is an apple bug - I can only test this in TextEdit on german osx 10.10

Or is it possible, that this is somehow influenced by kerning classes - all hebrew characters do not share classes with Latin, but the quotes’ class occur in Latin, too…?
Unfortunately, Glyphs does not re-import the hebrew kerning on opening the created .otf, so I can’t take a look… 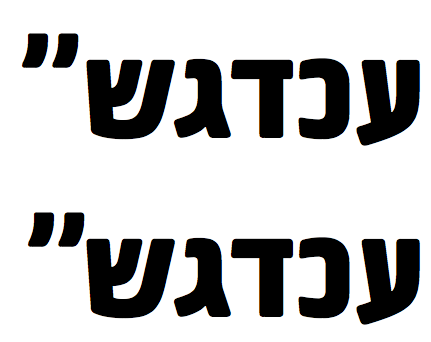 That has to do what the system picks as the ‘default’ language. That determines what script and direction the punctuation will be assigned. So a period or a quote between Hebrew letters is considered Hebrew and RTL. But if it is between Latin and Hebrew, is might be either Latin (LTR) or Hebrew (RTL). If the quote is considered LTR, then there will be no kerning with the Hebrew, as there can’t be kerning between scripts and directions…

But the quotes have the same unicode in hebrew, so if I use quotes or space in hebrew keyboard, they are part of hebrew, aren’t they.
Same happens with period and comma in combination with quotes.
And it seems, that the value between space and period will be set to zero and “transfered” to the pair before. Very strange 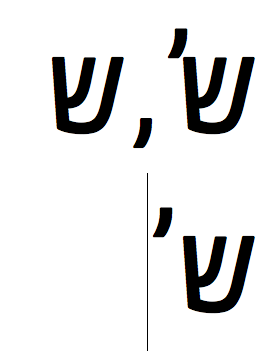 has nothing to do with the keyboard. Punctuation is neutral by default. It gets assigned a script/direction be the context. Understanding how that works is almost impossible.

Ok, but what can I do? I have set the os to hebrew and it is all the same…
Can this be solved anyhow?

And do you think, in apps where the language can be set, e.g. Indesign for Hebrew, this error will not occur?

You have to try