Hello,
on a 4 maters font, I’m struggling to find the right nodes position to avoid kinks in some instances.
Is there a way or plugin to see “live” the result of interpolated paths/handles for one target glyph on one or more target instances?
In other words, I’d need an option on the preview window to let it show paths and handles

Thank you for your help.

There is the plug-in Show Interpolations in the Plugin Manager. It does not show handles, but you will see kinks.

The RMX tools offer a dekink function, which can be triggered by a custom parameter.

@Mark isn’t this exactly what you were working on today?

variable font preview from @Mark can help you maybe.

@Mark isn’t this exactly what you were working on today?

I have a reporter plugin called “HOI Viewer” up on Github that essentially functions as a kink previewer that I’ve been using to make sure non-linear interpolations are kink free: https://github.com/mjlagattuta/Glyphs-Scripts/tree/master/plugins/HOI%20Viewer.glyphsReporter/Contents

It will show you the selected nodes at any place in your designspace, the selection will be saved and continue to preview until you reset it, which means you can continue editing to see your changes live. The nodes are color coded so anything that deviates from a straight line by one degree or more will appear in red, and as you approach a straight line it appears in green. Since this was made with variable fonts in mind, the interpolations are floating point coordinates, and so some rounding will happen if your end product is a static font 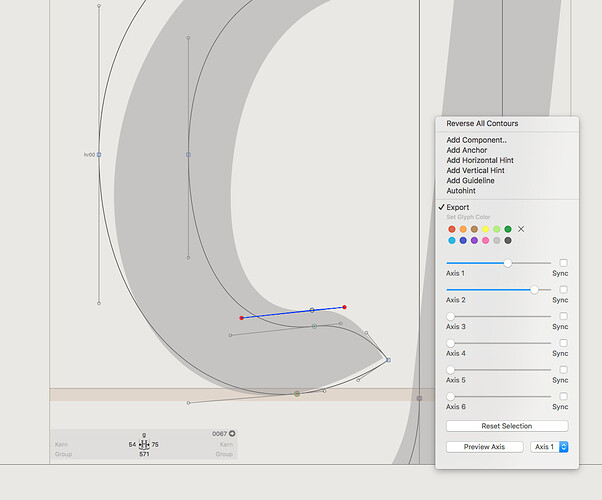 You can also check off certain axes to preview the selected nodes along that entire axis: 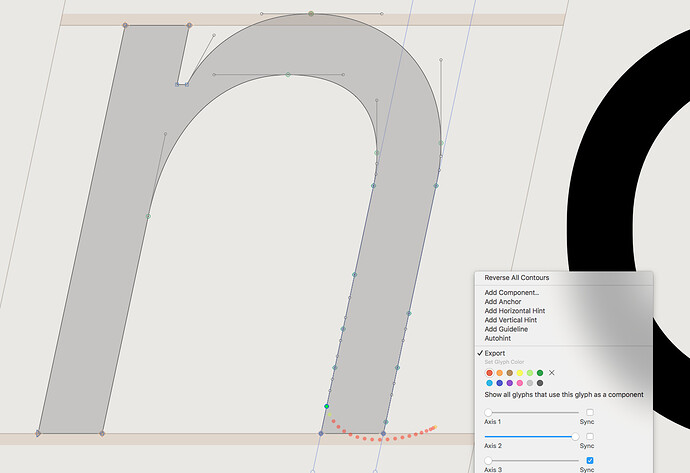 It’s not terribly polished since I was making it for myself, but it seems like this may be close to what you’re looking for 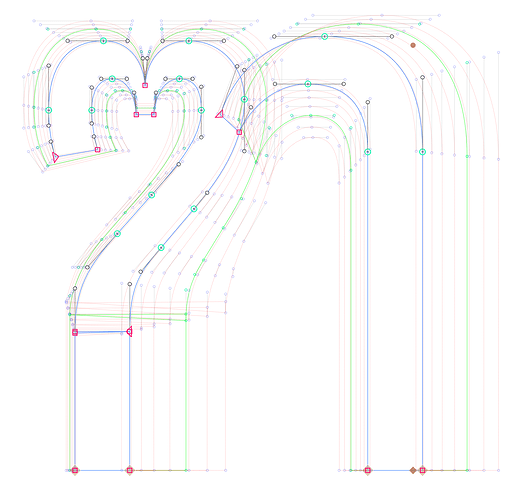 I made this one yesterday. It’s just showing the interpolations as @mekkablue’s Show Interpolations does, but also the nodes (and masters). I was never happy that neither the Show Masters Compatibility nor that one show the nodes. It’s not finished yet, I want to increase the performance. (I’m already using the interpolatedFontProxy, but the nodes still slow Glyphs down. For now it’s just made in Skedge

About the kinks: That’s a common problem with linear interpolation, and I also wonder about a good way to avoid those without the need of checking and even touching the final instances (because that’s basically entirely against the whole Glyphs workflow).
So for now I just know 2 ways: a) try-and-error to reposition angled nodes in all masters until the kink is gone (which might be not possible in some cases), or b) as Rainer wrote: use the dekink filter on export.
I’d be happy to hear about more ideas.

I have an idea. Can anyone send me some nice examples of kinks?

nice, unfortunately it doen’t seem to work with my masters configuration. I have a light, a regular, a regular optical, a black.

Would it be a good idea to run the script “Insert inflections” while generating the instance? (and in this case, how to run it?)
Without the intermediate node, my curves interpolate nicely. In theory this shouldn’t do disasters font wide, or?

Would it be a good idea to run the script “Insert inflections” while generating the instance? (and in this case, how to run it?)

Would be interested in seeing the situation where you need on-curves on inflections in PS outlines. They used to make things easier for PS renderers in the nineties. Nowadays, my impression is that all they can do is increase the file size.

You would do it with a custom parameter for the Insert Inflections filter, available in the Plugin Manager.

@mjlagattuta well, the preview (gray shape under my current layer) is showing something different than the real interpolation by instance. In addition, in my case I have some extreme values on masters but I never go so far for instances. It would be nice your sliders show the correspondent numeric value to be aware where we are in the continuum.

Personally I would be more comfortable without

So I’ve just added the filter “addExtremes”. I think it will be enough. In any case, should I check any mainstream software that could be trickier than others? For instance what about Windows, Edge, IE… which versions are the most critical and have to be checked? (for info, I’m just working on a display font).

In any case, should I check any mainstream software that could be trickier than others?

For Windows, you will probably export TTFs, and the TT outlines get inflection points anyway, at least since 2.5.2.

good to know, thanks! At least this time, the lazier choice is the better

That is strange since the preview is generated using Glyphs’ interpolation engine via interpolatedFontProxy. Could you post some screenshots of your instance versus what the plugin is showing, either on here or in an issue in my Glyphs Scripts repo?

Yes, I agree that would be very useful, I plan to add axis readouts/textfields soon.

Would be interested in seeing the situation where you need on-curves on inflections in PS outlines. They used to make things easier for PS renderers in the nineties. Nowadays, my impression is that all they can do is increase the file size.

That being the case, why then does Glyphs insert on-curve nodes at inflections when using the Offset Curve filter? It causes extra work to go through and remove them when they aren’t needed/wanted.