Including keyboard symbol glyphs in the typeface?

I want to include keyboard symbols like those: ⌘ ⇧ ⌥ ⌃ ⌫ into the typeface I’m developing - because they are needed in the UI of the product where this typeface is customised for. But I haven’t found enough information regarding:

It would be nice if someone with experience in this topic can share with me some best practices.

For Mac, you have already posted the most important ones: ⌘ ⇧ ⌥ ⌃. Some other commonly used symbols are

There are many more at The Macintosh Biblioblog: Special Key Symbols, but most of them are rarely used. There is no consensus, which Unicode characters to use for certain keys. Return might be ⏎ or

If a unified appearance of key symbols is important to you, you might need to offer a stylistic set that swaps conventional glyphs for keyboard-symbol glyphs.

For example, here I have decided that ⇪ should match ⇬ and ⇭, but there is an OpenType feature to turn /capslock into /capslock.alt: 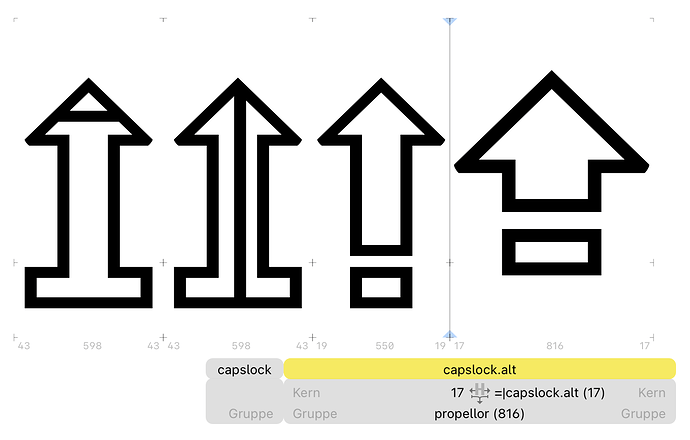 The feature then can have a name like “Keyboard Forms”:

A post was split to a new topic: Terminology used in the German translation

Thanks Florian! The list of those symbols is very useful!