Cmd-option-I from the main font window normally shows a glyph’s properties (script, category, subcategory) but when there are smart glyphs in the font, I can’t access the properties dialogue box, it always comes up with the smart component properties dialogue, even if the selected glyph is not a smart glyph. Same when using the menu command ‘info for selection’ as when using keyboard shortcut. 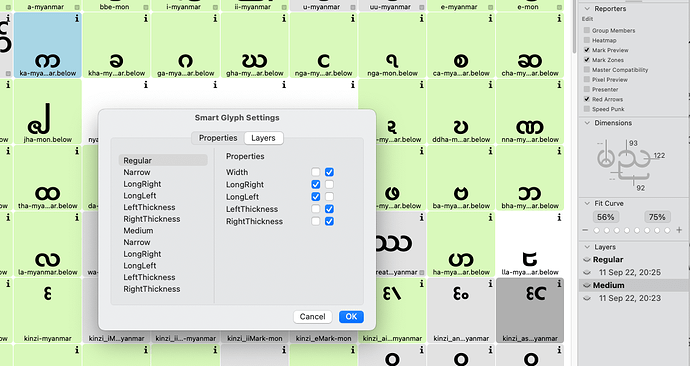 Will be better separated in the future.

In the meantime there’s no way to edit glyph properties?

The inspector in the bottom left of Font View contains most glyph properties: 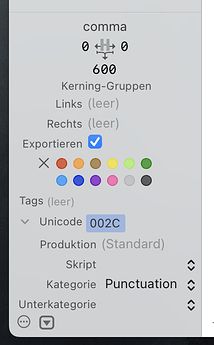 Ahhhh yes, I always forget about that one. Does it revert to a collapsed state? I’m sure I expanded it before.

It should remember its expanded state.

Can you send me the font that show the wrong info dialog?

Just to confirm, when I restarted Glyphs that properties box had reverted to collapsed.

I just tested it again and it stays expanded or collapsed – whichever way it way last configured. (Glyphs 3133)

Not for me. It’s collapsed again. Though I’ve had a few crashes today, maybe that’s also not helping it remember the correct state.

About the original question. Do you like to see the smart glyph setting in font view, too (for smart glyphs). Or only the glyph info dialog and the smart dialog in edit view?

Personally the smart glyph settings can be left inside the editing window. It’s a bit confusing to have different dialogue boxes appearing for cmd-option-i depending on whether they’re smart glyphs or not.

Can you also reinstate ‘previous’ and ‘next’ glyph in the glyph info dialogue? Please

btw: what info are you editing that you need that dialog so often?

Normally when adding new glyphs that are not defined in the xml I want to check the properties.