hi—this occasionally happens when I’m moving between glyphs in a string—the proper glyph will show its outlines for editing, but the info panel stays focused on the previous glyph in the string, which I’ve just edited properties for. I’m on 3.0.5 (3122) but have seen it in the past few cutting edge versions.

the proper info panel shows if I double-click the glyph again, but sometimes I don’t notice the error & end up putting incorrect values in the previous glyph. 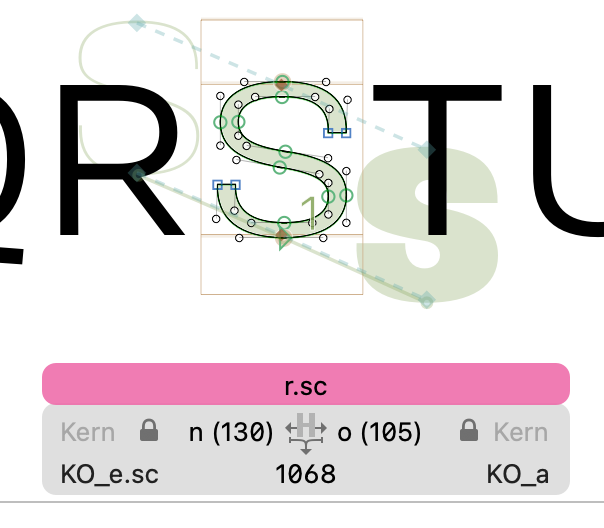 Have you used any scripts before that happens?

in this case, I had @Mark’s show stems pro active a few steps before I saw it, but that had been turned off by this point. I see it when I’m just moving points or changing sidebearings, with or without a script/plugin having been run immediately before. haven’t been able to isolate or repeat it.

(in case it helps, I’m on macOS 12.3.1 running on a 2020 M1 MacBook Air with graphics piped into an LG UltraFine display—although I’ve seen it happen through the built in display as well)

It would be good if you could reproduce this.

You switched to the s.sc by double clicking it? Do you have a feature active in the lower left popup?

I’ll try to reproduce; was posting it here suspecting someone else might have seen it as well.

I had no features active in the dropdown; I opened these characters directly from the font window.

I couldn’t imagine that Show Stems Pro can cause that. It’s doing nothing remotely connected to that as far as I know. But let me know if it can be nailed down to it as a cause.

I don’t think it was Show Stems either; I mentioned it because it was the only plugin I’d had active during that particular session. but I’ll keep an eye out for reproducibility.

I isolated this! it wasn’t Glyphs itself! fyi.

I realized my first move would reliably fail to reflect the correct value in the info panel‚ and this includes switching to another glyph—but second increment always reflects accurately. I uninstalled and reinstalled every extension one-by-one. the culprit was “Sync Metrics Keys” from Underscore Type. I’m reporting it on the Git repository, but thought I should report it here as well in case anyone else is experiencing it.