I am designing a family with Text and Display styles. I have Thin and Bold extremes of each. All masters have correct outlines, but I have a problem when interpolating instances. I tried to follow the guidelines in the Glyphs Handbook, but the Masters and Instances windows in the updated program no longer match those illustrated in the handbook. I created a Regular instance between the Thin and Bold Display styles which were the only ones in the Instances panel. Both are active. The Regular Instance which has been created is between the Thin Text and Bold Display. The illustration shows: Thin Display, Regular instance, Bold Display, Thin Text and Bold Text. What am I doing wrong?

I don’t understand you setup. Can you post a screenshot of the layer panel?

Are you using the same starting nodes between masters? I’ve seen wonkiness like this in my stuff when I’m off by one node.

Here are the Masters, Instances and Layer panels. I haven’t actually been using the Layer panel.
The wonkiness is deliberate to show which glyphs corresponds to the instance.
The instance is supposed to be the middle glyph between 1 and 2, but is actually interpolated between 3 and 4.

I think you need to set up a second axis. Because you also want an optical size, right?

OK, thanks. Yes, I want interpolated weights for Display and Text. I’d like to know where is the information regarding Axes coordinates, Weight and Optical size for each Master in the manual, or tutorials? I still don’t know how to do what I want as indicated in the question above. I think you assume I know what I’m doing, but I’m fairly new to Glyphs, having worked in FontLab 5 (and VI until I could stand it no longer).

First I would add an optical size axis as @mekkablue suggested. To do so:

Now if you go to the masters tab you will see that each master now has two fields for coordinates: weight and optical size. I would double check that each master has sensible values and then add your desired instances accordingly.

I thought Glyphs was supposed to be easy! It was much easier in FL5 just to select 2 named fonts and do a percentage blend between them.
I have done what you suggested but it doesn’t work. Where are these opsz values from?
The image shows the instance in the middle, but it is obviously not a straight blend between top and bottom. Look at the thickness of the serifs and thins. How does one know which 2 fonts are being blended? Why are all these values added manually? How does one know which values to insert?
I just don’t get it. 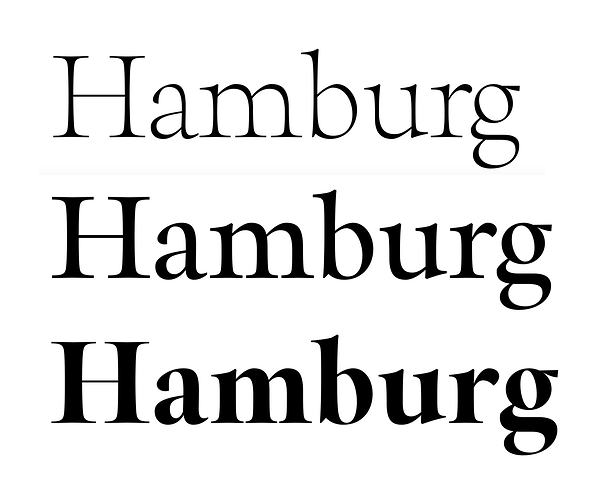 If you only had two masters, it would be much easier

But you have six and that was not even possible in FL5.

Have you read the Multiple master tutorials? https://glyphsapp.com/tutorials/multiple-masters-part-1-setting-up-masters

I get it now. Finally!
Thanks very much.