Simple idea: I would find it helpful to see whether an instance is checked as active in the list of instances, rather than having to click on each instance to check its status. This could be done by moving the ‘is active’ checkbox onto the instance name in the list.

Then it would also be nice to have a ‘check all’ / ‘uncheck all’ option. Especially when I’m testing fonts, I want to only generate a subset of instances, so being able to fairly quickly edit the set of active instances would be helpful.

[Another way to manage the latter use case would be the ability to define instance sets.] 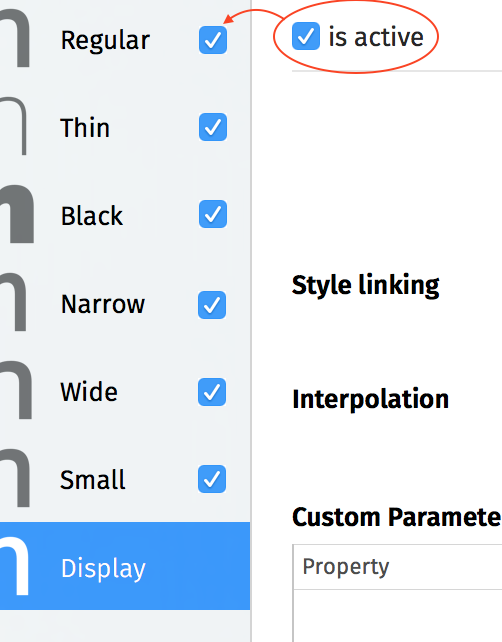 You can check and uncheck all simply by selecting all instances and clicking on the checkbox. Same is true for all other controls.

Status of instance is shown with the sample letter. Inactive instances are greyed out. Is this not the case for you?

Still think it would be useful to be able to quickly click checkboxes up and down the list rather than having to select instance, move mouse to checkbox, move back, select another instance, etc.

Context here is that I have 270 instances.

Yes, checking all or checking none is easy. What I’d like is a minimum effort way to check some.

What I do in that case is to fist select all, then cmd+click the one I need (to deselect them) abd then uncheck the active-box for the remaining ones. This is only ver few actions more.

You can also select one instance. Then, Shift-click another to select the ones in between the previous selection and including the one you selected. Then, use Command-click to add others to the selection and maybe do another Shift-click to select a range. Hope that makes sense.

Is the number so high because these split up into different file types, like WOFF, CFF and TT? If so, I would consider using .glyphsProject files. You can copy and paste instances between the Font Info window and the Project window.

It’s high because 3 axes: one with nine named instances, one with five named instances, and one with six named instances. So 270 i just the outcome of interaction of those axes. Some of the test environments within which we need to examine the design are not variable font savvy, so a lot of static instances need to get generated as test sets, but in some cases we only want to test a portion of the design space.

I’ll take a look at the project file mechanism to see if this might be useful in this regard. Thanks, Rainer.

Badass project, respect, John. I think this is a good idea, and I’ll file it as feature request. (No guarantees at this moment though, still need to discuss internally.)

You probably do not need the if line. The loop does not execute if the collection is empty.

You don’t need to check if there are any instances. It will just not do anything anyway.
And just as a small exercise:

And if you run that in the Macro panel, you there are two preset variables: Font and Layer. They contain the current font and current layer.

I guess my coding style shows that I learned programming with languages where you learn the hard way to be always certain that the data you look at really exists.

And in most python scripts that is a very valid way to do things.

I do have an instance management suggestion too.

Being able to edit custom parameters for more than one selected instance is on the list for some time. And we are working to fix it right now.