I’ve run into a recent issue in Glyphsapp where certain ligatures that automatically activated before when testing out my font in InDesign now no longer do (using the export to Adobe folder method). Some f-combined ligatures still activate automatically; however, my t-combined pairs must now be inserted manually via InDesign’s Glyphs panel.

So next, I tried updating my ligature set via the Update button within the Instances tab under Font Info, and the following prompt appears, reading There is a problem with the font: 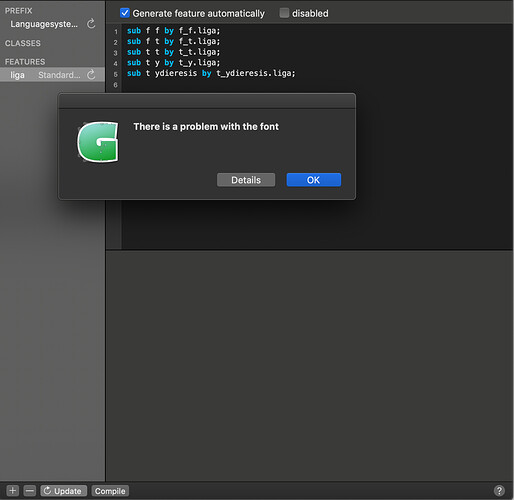 I suspect that the update that was recently released for the app may possibly have something to do with this, as I remember seeing a prompt warning me that my file had been created under a previous version when initially running it after updating, but am not 100% certain if this is the cause. I also created a new t-combined ligature when building out diacritics in my set, and that may also have caused the issue, but again, I’m not 100% certain about this.

Could you send me the .glyphs file?

Is there a way to message you the file, or should I post it here?

You can send it by email to support at this domain or via a direct message in the forum.

Your habit to abbreviate “with” with “w/” is the problem. You have one in the font name and that messed up the temporary compilation of the font. I fixed this. Until I upload a new version, I recommend to remove the “/” from the font name.