软件用于制作中文汉字，但是发现缺少对齐分布这个功能，确实降低了效率，汉字笔画非常多，如果能增加对齐会对做字体效率大大提高
The software is used to make Chinese characters, but it is found that the lack of alignment and distribution function does reduce the efficiency. There are many Chinese strokes. If you can increase alignment, the efficiency of font making will be greatly improve

Can you post some examples where you would like to use the align function?
Is it only full paths or also parts of paths (the later would be much more difficult to automate).
Have you tried to adding a measurement guide? That will give you instant feedback about the distances between the strokes.

感谢回复，首先测量功能已经了解，他能告知我们相对距离，但是AI（illustrator）软件里面的平均分布在制作汉字的时候会频繁使用，我暂时没有在glyphs里面发现可以快捷分布的功能，以下是我截的一些图：
Thanks for your reply. First of all, the measurement function has been understood. He can tell us the relative distance, but the average distribution in AI (Illustrator) software will be frequently used when making Chinese characters. I haven’t found the function that can be quickly distributed in glyphs for the time being. Here are some pictures I cut: 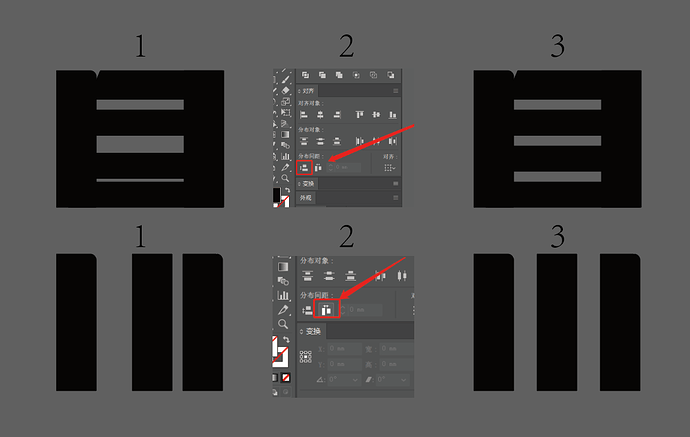 1627724863(1)1091×692 41 KB
汉字中很多时候需要这种分布，有这个功能就会迅速平均，希望以后更新能有这个功能的增加
This distribution is often needed in Chinese characters. With this function, it will be quickly averaged. I hope this function can be added in future updates

I’ll think I can add such a function. The first example would only work if the horizontal strokes are individual paths.

Would you expect that in the first example, the horizontal position is changed or not?

是的，我只需要在闭合路径中使用即可，汉字笔画会经常出现需要平均距离的时候。示例中的平均分布例如四个矩形，分布的时候第一个和第四个是不动的，它就根据第一和第四的距离来平均第二和第三，最后使得他们的间距被平均
Yes, I only need to use it in a closed path. Chinese strokes often need an average distance. The average distribution in the example is, for example, four rectangles. When distributing, the first and fourth are fixed. It averages the second and third according to the distance between the first and fourth, and finally makes their spacing average

There are distribution functions in the mekkablue scripts but you are right, at some point it should make its way into the palette.

Would an extra plug-in suffice, or should it be in the default Transformations palette?

As this is a very specialized function, an extra plugin might be better.

Update: You can now install the Distribute palette from Window > Plugin Manager > Plugins.

Well, thank you very much.

I just found this thread and installed the Distribute palette after working for two days on designing a dot matrix font with hundreds of dots… Is there a reason why it’s not automatically installed with the app? It’s so useful, and such a basic tool for people coming from Illustrator.

Can you show the design? Before cluttering the UI for all users (the vast majority of which don’t need it), I want to see what you want to achieve. Perhaps there’s a better or more efficient way to reach it. 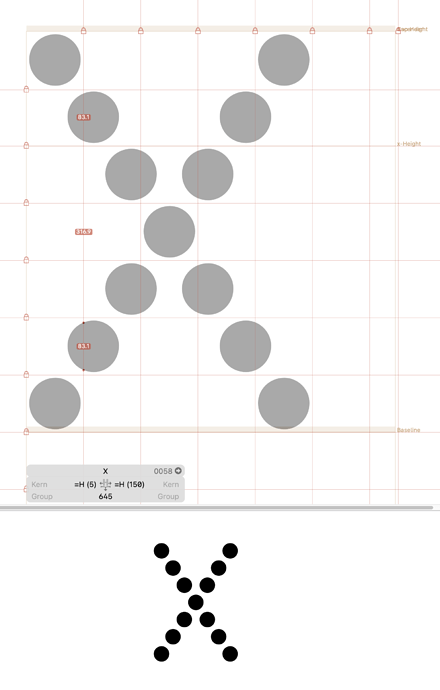 The dot matrix font I’m creating is based on printouts from a 9-pin printer from 1987 which had wider spacing than normal (i.e., more horizontal space compared to vertical space). I made a grid of global guides 100x100 square, and then use the X,Y values to place dots 110 or 120 units wide as needed. But some calculations, like the X in the image, was much easier to do with horizontal distribution. I just think Align & Distribute should be in the Window menu, even if it is not open by default.
Thank for the link to the pixel font article.

As someone who prefers shortcuts over palettes, I use a little spin-off of @mekkablue’s script to Distribute Nodes Horizontally OR Vertically , in case somebody finds that useful.

Distribute is not even the best option for your design. See the pixelfont tutorial. This can be better achieved with a properly set grid step, and it is more precise than object distribution.