Hi Glyphs coworkers !
I hope you could help me again

I made several ligatures for my font (more than 40)
And I’m experiencing two weird things about those ligatures :

• They appear in the Glyphs main window, just below the “standard letters”, except for two of them, which are at the very bottom of the window, below my alternates :

• When I click on the “Ligatures” menu item in the left column, it only shows 8 ligatures !

Does anybody know what is happening with those damn ligatures ?

You have a “glyphOrder” custom parameter that controls the order some of the glyphs. All new glyphs are not in that list and thous are sorted below. I would remove that parameter.

You are right, @GeorgSeifert. Don’t know where this custom parameter came from…
I’ve just removed it but I still have only 8 ligatures showing in the “Ligatures” filter menu…
Do you know why they don’t all appear here ?

Those ligatures have a Private Use Area unicode. Those overwrite the setting of the category.

I most likely don’t want to add those codes.

Thanks @GeorgSeifert but I did’nt add any codes

(neither did I add custom parameter for the glyph order…)
This could come from the Fontself plugin I use to design and kern ?

So please tell me how remove this Private Use Area Unicode…

Select all the glyphs that are in the “Private Use” group. You should see a “Unicode: Multiple Values” in the lower left of the font view. Type an space, tab out of it and then remove that space again. Then run Glyph menu > Update Glyphs Info.

Thanks, but I don’t see any “Private group”… is it in the left-side column ?

I meant the group headers in the glyph list. There are ‘Letters’, ‘Numbers’ …

I’m sorry, @GeorgSeifert but I don’t see that “Private group” in that column…

I don’t mean in the sidebar, but in the main area with the glyph.

Just select all the ligatures that are at the end of the Glyph list.

OK I get it.
So you recommend to type a space in the “Unicode” field for all my ligatures ?

OK I did it, but now I have two types of ligatures :
Some with a Unicode + production name (Script [VOID]) and some with an english name without anything in the Unicode field (Script Latin)

Is it a problem ?

You need to remove all those Unicodes from the ligatures. Then rund the Update Glyph info for them.

i’m wondering if pressing alt+cmd+i with a glyph selected works in Glyphs Mini. you can edit all the glyphs info there - removing production names, renaming the glyph etc 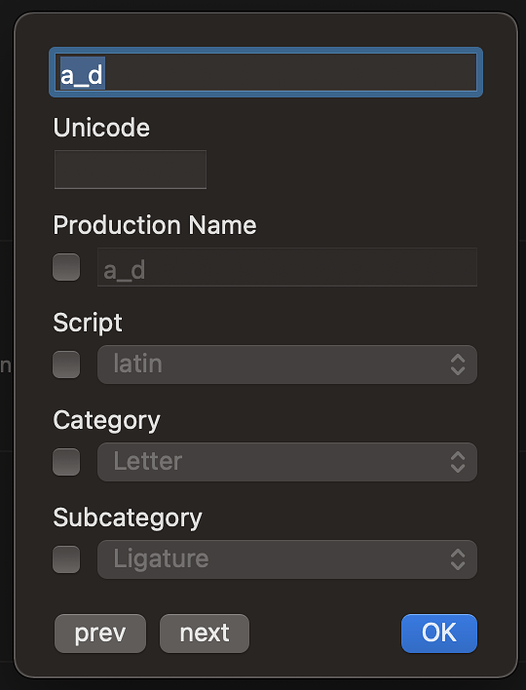 Thanks @elena & @GeorgSeifert.
I can’t remove all the Unicodes and production names (the “Multiple values” text is always there)

Even if I type a space char in the field, once I hit “tab”, the “Multiple Values” text comes back (in pale grey)
(Same thing after “Update glyphs informations” command)
I use Glyphs3 (trial version) now, but when I press cmd+alt+i, the pop-up that appears is different than yours, @elena : I don’t have the Unicode & Production name fileds…
More, all my ligatures have now a little “i” icon (Same thing after “Update glyphs informations” command) > what does it mean ? 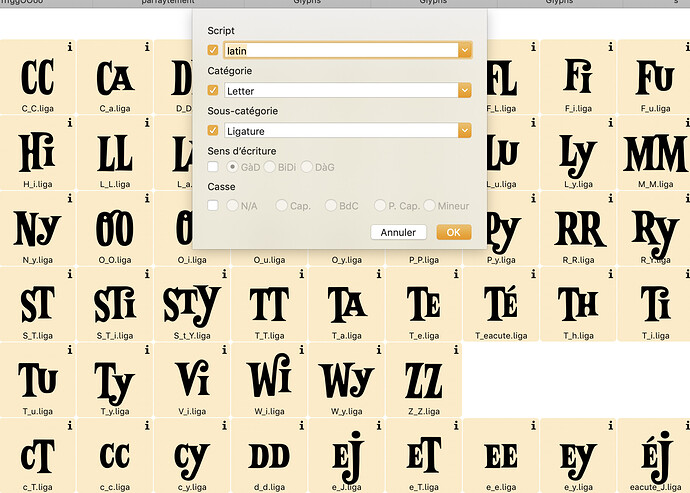 You can run this script in the macro panel with the offending glyphs selected in font view:

Thanks @GeorgSeifert but it makes no change at all…
What the litlle “i” icon meeans ?

The “i” means that you have manually set glyph info. That is what elena was explaining.

At least in that video, the reason the info area of the left sidebar shows multiple Unicode values is because multiple glyphs are currently selected. Select a single glyph to see what’s shown for that glyph.

You are absolutely right, @composerjk !
So I think this thread is finished now :
The “i” doesn’t mean anything bad for my font

and the “Multiple values” info is logic !
Thanks @GeorgSeifert @elena and @composerjk