In order to keep compatibility between masters, I have some glyphs which have straight lines which are actually curves with all 4 points aligned.

If I remove overlaps for the glyph, I lose the 2 off-curve handles and therefore also lose the compatibility with the other masters. I appreciate that what it’s doing is sensible for the majority of cases, but it’d be useful if there were a way to keep the off-curve handles in this situation. Does anyone know of one?

Can you show a screenshot of the situation before overlap removal? 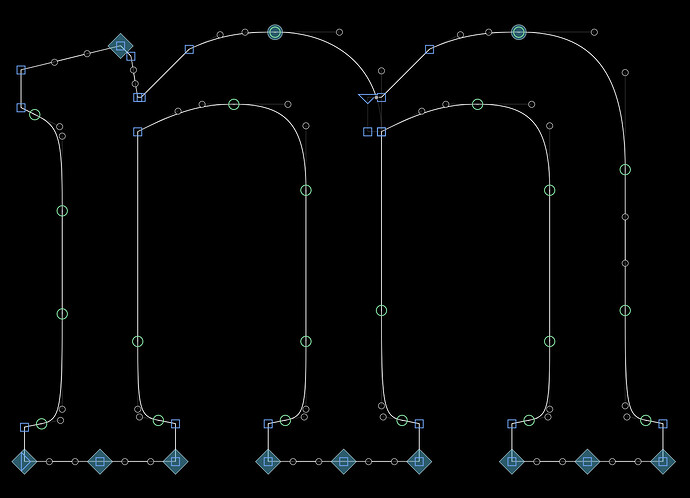 I first noticed this was happening while using the /n to make the /m. There are quite a few instances where the points are aligned; on the horizontal to the right, the base of the serifs, and the angled parts of the upper serif.

Having done it again to capture the screenshots, I noticed that removing the overlap only gets rid of some of the points I’m referring to, as shown below. I’m not sure why that’s happening, the segments at the base of the serifs are all the same length with handles of the same length, so it’s not like there’s a minimum value that’s triggering the removal of some but not others. 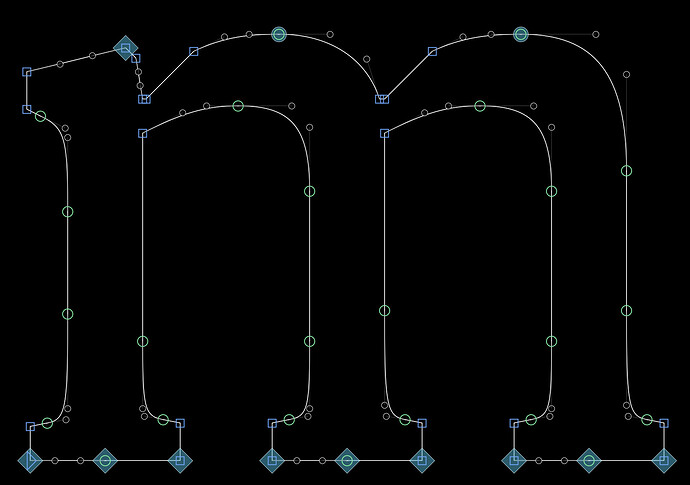 I don’t mind too much if this happens when making the /m from the /n, it’s just a few extra clicks to fix. However, I was looking into whether I could save myself some time by using components, which I’d then want to decompose and remove overlaps on. But if I have to go back and add in the off curve points for all the serifs, that’s going to wipe out any time savings and then some…

If it can’t be avoided, then it’s no problem, I just thought it was worth asking the question. I might be able to do the same thing with corner components without the need to remove overlap at the end.

You might also just keep the overlaps. In a lot cases the interpolation will be much better with them.