Has anybody already installed Glyphs 3 on MacOS 13 Ventura? Does everything work?

Has anyone tried Ventura with Glyphs 2?

On Mac, Ventura Glyps Mini crashes when you command the application to print.

I fixed the crash for Glyphs already. I’ll check Glyphs Mini, too

On one of my Macs, an unsupported Late 2012 non-Retina 13’’ MacBook Pro running Ventura (13.0.1) thanks to OpenCore Legacy Patcher, Glyphs 3 does not run at all. It just bounces on the Dock and crashes.

It is, however and as far as I could ascertain, the only application not working (and that includes Apple apps, stuff that relies on Metal, etc.). I tried everything I thought might help, such as trashing its .plist or removing the Glyphs folder from ~/Library/Application Support so that it doesn’t try to load potentially outdated and incompatible plugins, to no avail.

Do you reckon this is something that may be addressed in the future? I know this isn’t a supported config but, honestly, this computer still works great (incidentally, Glyphs 3 isn’t that heavy of an app, system requirements-wise), and I don’t feel much like plonking €3000 on a new Mac.

Edit #1: Upon rebooting, Glyphs is running again. I will try re-adding my plugins and update you on whether it’s still working ok or not.

Edit #2: Ok, it seems that last time I started Glyphs, two of my plugins, Red Arrow and Speed Punk, crashed. Interestingly, they were laying on my Desktop, so I don’t get how Glyphs even got to load them at all.

Edit #3: And now I’m getting this error report on Red Arrow, which I downloaded from Glyphs’ own integrated plugin manager: 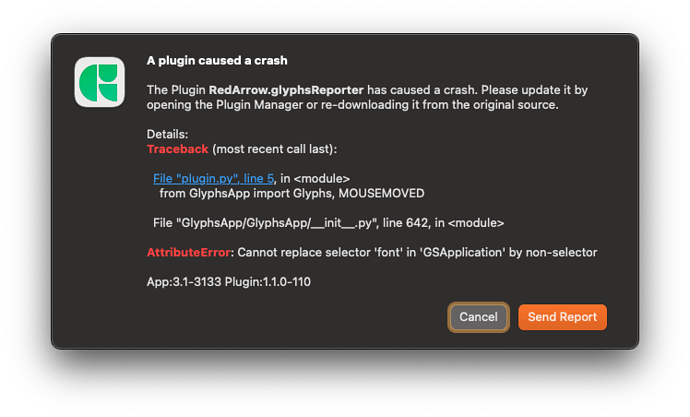 Edit #4: After going to Preferences > Addons and changing the Python version from 3.9.10 (Homebrew) to 3.9.1 (Glyphs), I’m no longer getting any error messages pertaining to plugins. However, neither the Red Arrow nor the Speed Punk menu items appear under the View menu. I’m at a complete loss as to how I can get them to work.

Edit #5: After uninstalling one of the plugins and reinstalling, both now appear and seem to be working. So, at the moment, I no longer have any complaints, but well, at least there’s a record of these glitches.

Your homebrew python installation had installed a incompatible version of the required pyobjc module (version 8.5 is broken, you need either 8.4 or 8.5.1).