I have some folders containing only SVG files. Out of each such folder I’d like to make with the help of Glyphs Mini a system-wide font, accessible in
Edit → Emoji & Symbols
in every application.
Many thanks.

This is a character picker, not a font menu. Apps that have a font menu can let you pick your font, e.g. TextEdit > Format > Font > Show Fonts.

I have some folders containing only SVG files.

You can drag and drop SVG files into Glyphs Mini. But only export a black&white font. See for yourself with the trial version.

If you want to export an SVG color font, you will need the (full) Glyphs for that.

(1) Is it possible to make also Character (picker) Sets using Glyphs Mini? (Black-and-White would be fine, at least for the time being.)

(2) I have dragged-and-dropped one SVG file into a new glyph, but, I guess, I have to learn the basics, how to symplify paths. I tried
Glyphs → Tidy up Paths
but is was not so useful. The file I started to work on, should have only circle segments and straight lines. Still, there are hundreds of intermediate points, suggesting a much more complicated SVG drawing.
Is it any way to symplify (or tidy up) an SVG file, say, into quadratic and straight lines only?

Would anyone recommend me one of the following applications:
(a) Art Text 4
(b) EazyDraw 9.7.1
or
© Logoist 4.
or rather another application, for a thorough SVG-simplification (as described above)?

In gratitude to anybody who will take the trouble to answer question (1) and/or question (2).

(1) Is it possible to make also Character (picker) Sets using Glyphs Mini? (Black-and-White would be fine, at least for the time being.)

Glyphs Mini is a font editor. You make fonts with it.

A character set is not a font. It is just a list of characters, I believe the character picker lets you customize the sets displayed via its gearbox menu, at least to a certain extent.

Perhaps you mean, ‘Can the Character Viewer display a font other than the system font?’ Not in the main list, but it lists all installed fonts that have a glyph for that character in the ‘Font Variation’ section: 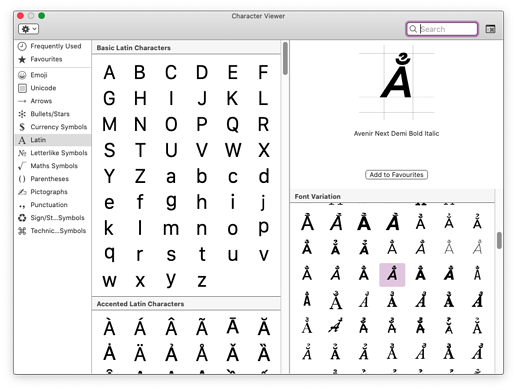 how to symplify paths

Outline simplification is not trivial and a lot of guesswork is involved. There are some plug-ins and scripts for (the full version of) Glyphs that can help you spot and/or fix specific outline problems.