also tried
— to “Disable Subroutines” in each instance
— to go with and without the letter “i.loclTRK”

the error message is speaking about the letter ‘i.loclTRK.1’ (with a one at the end). There seems to be something wrong with the anchors in that glyphs.

ah, ok.
but the strange part is: my font does not contain such character.
I just send you the file to support@

But maybe both idotaccent and i.TRK next to each other? Delete or disable one of them.

Just had a look at the file you sent us. There are two idotaccent glyphs. Remove one of them, and it is going to export just fine.

thank you. that works.

First: what an amazing app you guys have made! I’m still on trial time and I’m beyond impressed.

Now, I seem to run into the same problem as jakob_runge. The error message speaks of a glyph called uni1EE9.sc but that glyph does not exist.

uni1EE9 is the ‘uhorn’ glyph and I did duplicate that glyph to make the corresponding smallcap, but that glyph is not named uni1EE9.sc and when searching for uni1EE9.sc nothing is found. 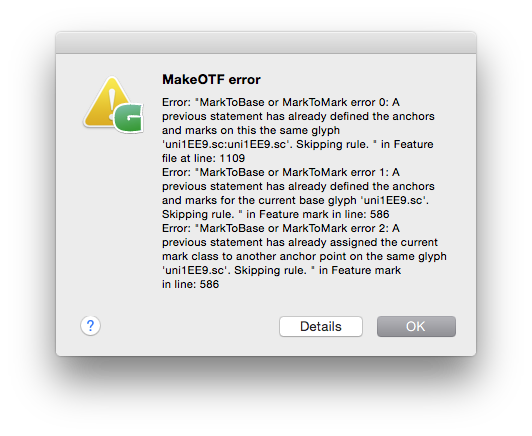 I did a search for ‘uhorn’ and got this (and you where right, it’s not uhorn but uhornacute) 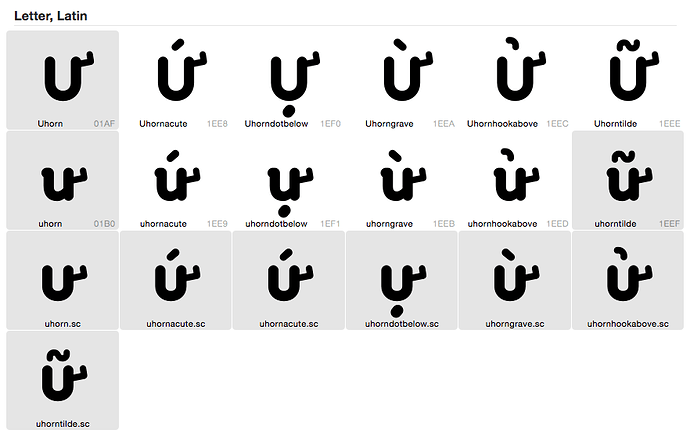 Turns out I DO have a duplicate glyph: uhornacute.sc.
I suppose I got caught by the error message referring to the glyph by un-nice name instead of nice name

Another mystery solved, thanx a lot.