I just exported my font as an .otf and .ttf. In the font preview for the .ttf, the capital A does not look right. Also, when I opened the files in Glyphs and looked at font features, there were multiple error messages. What can I do to fix these issues? 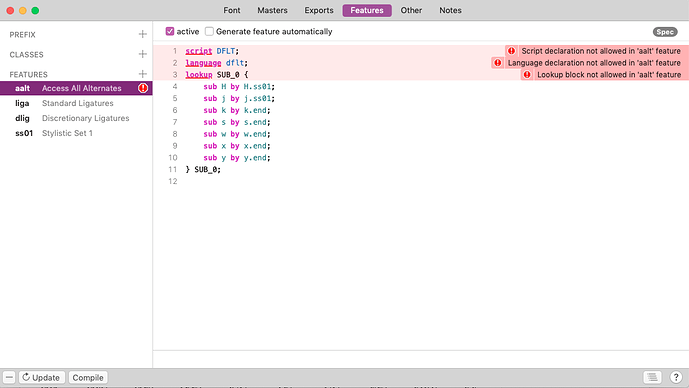 How is the A supposed to look like? Can you post a screenshot from the edit view with nodes visible?

The feature import is much improved in the next version.
You can remove all features and click the Update button. 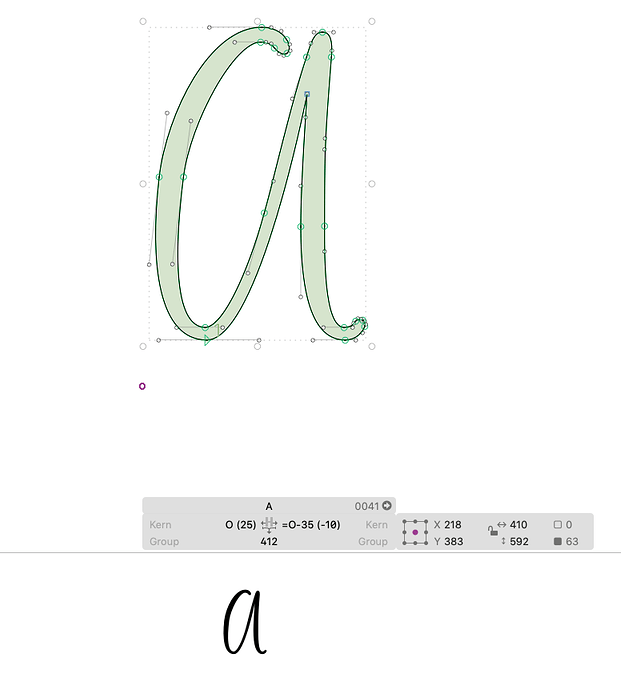 It seems that the conversion to TrueType fails because there is a “half dead curve” (from the starting point to point connecting to the stem. You can use the “Fix Zero Handles” plugin from the plugin manager to fix this.

And can you send me the .glyphs file that I can try to improve the algorithm?

The error messages are only coming up after I reopen the oft and ttf files. They don’t appear in my original Glyphs file. If I delete the features, wouldn’t I be losing the ligatures and alternates?

I downloaded “Fix Zero Handles” plugin. How do I apply it to the A?

Why do you open the .ttf file?

I opened the .ttf file because I was trying to figure out the problem with the uppercase A.

Then just ignore the errors in the features.

Ok. The error messages in features won’t cause issues with the font?

The issue is with the import. That should be fixed with the latest cutting edge version. And you should not keep the opened file, only open it to check stuff, then keep editing the original file.

I am using Glyphs 3. Do you mean a new version of Glyphs is in the works which will fix the issue? I have been testing the font and overall it works well except for some minor kerning issues in Microsoft Word. I just want to make sure that the font will work for other people if I share it online.

Could you still send me the .glyphs file that I can check the TrueType conversion?

I sent you a message.