according to this forum link, it should be possible to have more user friendly names for stylistic sets (now).

I am not sure how it could be possible to do that in glyphs, since the wrapping feature syntax is kind of unaccessible, which is a nice thing in general for the ease of glyphs users.

I tried a workaround in another font editor where i copied that exactl line of code, but still in indesign cs5 it’s just »ss01«

Do you guys know more about that? would be a pretty welcome nicety to have.

Because InDesign simply does not use descriptive set names, which is a big shame.

I believe there is no software yet that actually supports it, but please correct me if I am wrong.

FYI: a little type-mistake in the german Glyphs when an error occurs:

Though few (if any) apps support the named stylistic sets, you should be able to set the friendly name in Glyphs. In the Features tab of Font Info (Command-I), select the stylistic set you want to name and add in the Notes section at the bottom:

oh, i understand. i thought this panel was just for parking comments (also naming the stylistic sets »just« for your workfile and reference). thanks for that.

Just tried adding names to my stylistic sets and noticed a funny behaviour. It seems only those names are added that contain a non-ASCII character. A bug, I guess?

Just tried adding names to my stylistic sets and noticed a funny behaviour. It seems only those names are added that contain a non-ASCII character. A bug, I guess?

I cannot reproduce the problem you report. I tried in both Version 2.0.0 (657) and Version 1.4.4 (606) with “Name: Alternate Ampersand”. And they both produced the correct feature code in the features file:

And I checked the final OTF with OTMaster, and in both cases, it made it into the name table as expected.

Just tested a bit more and found out that it has nothing to do with non-ASCII characters. Sorry, that was a false conclusion.

I thought simply giving the affected character as the feature name would be the most sensible approach. Adding “alternate” seems superfluous, this is always about alternate shapes. Of course, one could be more specific, say, “double-storey g”.

I cannot test it myself right now, but maybe it is the newline at the end?

No, this is not related to newline. That is what I also suspected first but it does not make a difference in my tests. It is simply the length of the name.

It was indeed a problem with the name length.

This didn’t work for me, did I do it right? 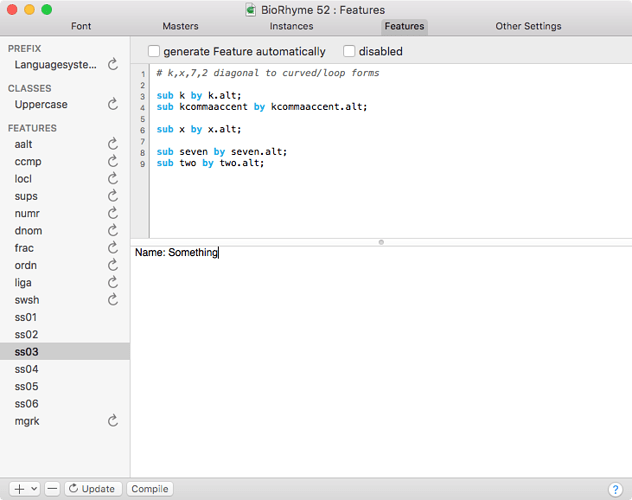 If so, how can I find the “Something” in my exported OTF? Running ‘ttx’ on it and grepping the XML returned nothing

That should work. It’ll be in the namerecords of the name table which you can look at via:
ttx -t name font.otf

This should work. You can check the .fea file in the temp folder.

Related to this, MacOS 10.11 supports named sets. You can access them in most apps that use the system font api’s, such as TextEdit, Pages, Keynote, and Numbers. Check it out: 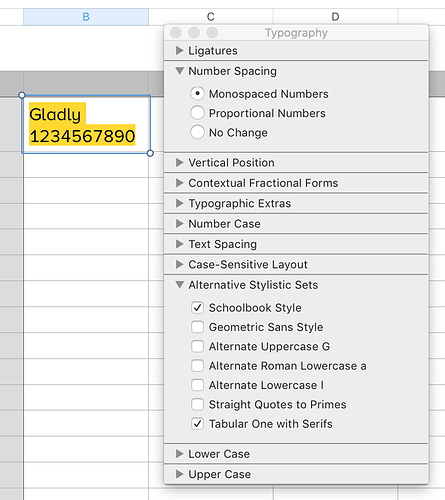 I have notice that you need a tab between ‘Name:’ and the text string.

A space should suffice. It did the last time I used it.

You can also do it like this (in the code for the ssxx feature):

It’ll be in the namerecords of the name table

Strangely, it wasn’t - or grep would have found it.

Still no dice for me with a tab: 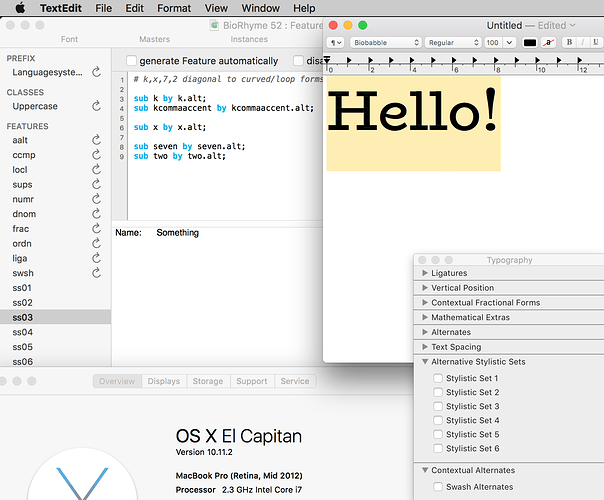