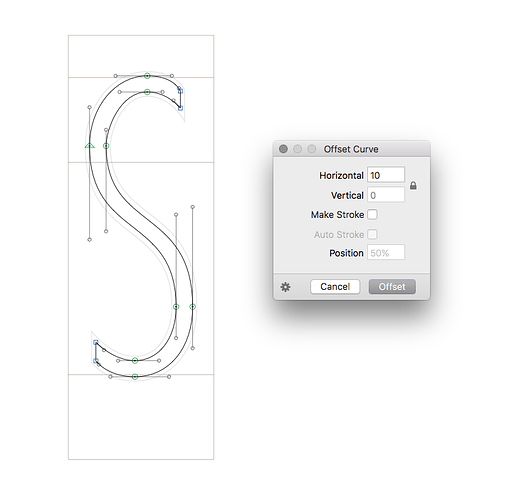 I am running into an interesting issue and I am not sure how to resolve it - Was looking into creating a faux bold for testing by using Offset Curve. When applied as a parameter it seems to work on about 80% of my paths as intended (see: http://pasteboard.co/FtmQZJ7wS.png) but on the remaining paths it seems to have the inverse effect (see: http://pasteboard.co/Ftn5MPirq.png). When given a positive value the “S” glyph offsets like a negative value would. If you put in an equal but negative value on those character you receive the desired effect of expanding the lines.

I wasn’t able to track down a previous example of this so I am not quite sure where to start with what might be the issue. Hoping someone might have seen this offset curve inversion before

This is happening because the paths have different directions. Please read the following tutorial, particularly “Path orientation and order”: https://www.glyphsapp.com/tutorials/drawing-good-paths

In a nutshell, just run Path > Correct Path Direction (Shift-Cmd-R) before offsetting and you’ll be good to go.

Ah had a sneaking suspicion - Thanks!