I’m trying to open an exported from Glyphs .otf file to add a character but some characters are opening with misplaced nodes and weird curves. You know what could be wrong and how to fix that?

Can you send me the .glyphs file? mekka at my username dot com.

You have the App Store version? The this is a known issue and will be fixed in the next update.

Mekka, I should send you the .otf file, but since it’s a known issue, I think it’ll be resolved whenever the app store update comes up!

I’m experiencing the same problem but purchased glyphs from the glyphs.com. What can I do about that issue?

I am not sure what exactly your problem is. Can you send a screenshot? And describe exactly the steps for reproducing it, please?

And have you tried the latest cutting edge version?

After exporting my glyph file into a otf-file and I reopen that particular otf-file in glyphs some glyphs there have these incorrect connections, which only appear after exporting. 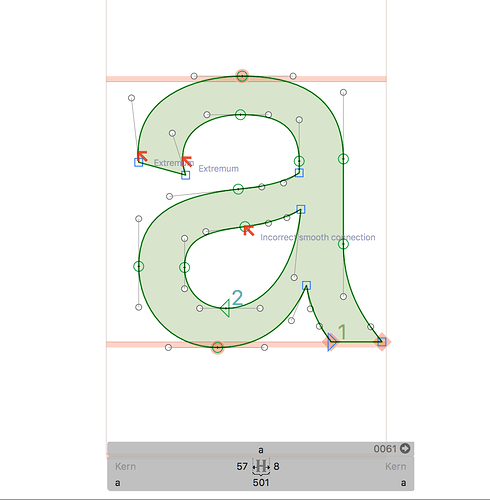 The nook is barely visible.
I just downloaded the newest version and checked it again. It seems that the problem isn’t there anymore. But I’ll check with the other instances and 'll come back if the issue reappears.

This seems to be a grid rounding problem. If you are exporting CFFs, I would say don’t add these inflection points, and you avoid the trouble from the start.

The red arrows might be a bit too precise. Interpolating diagonals might lead to this tiny misalignment. But as long as it is not visible, it isn’t a problem.

@mekkablue thanks for the infos and quick responses!
@GeorgSeifert ok, I just want to make sure that all the paths are clean, but as I shortly mentioned above it is nearly invisible; only if zoomed in to about 300% you can see a really really small nook. So, thank you!