We are working on a graffiti / silly bubble font made up of outlines and need to somehow work on some contextual / positional alternate pairs for all letter combinations — the way the letters link up each time will be different to give the full graffiti style treatment.

Am fairly new to this level of technical engineering but have tried the following:

The answer depends on how the glyphs connect to each other. Can you share screenshots from a few samples of your glyphs?

Maybe this is all you need: Designing a handwritten font with loads of alternates for each letter? Read this. I hope you like Swedish pop music.

Some very rough sketches we did to test this out:

The below illustrates how taking a sample for just a few letters shows how we would need a range of alternates to connect. We need to give the impression of overlap. Essentially we need to write some kind of substitution that will substitute select letters depending on which glyph has come before. 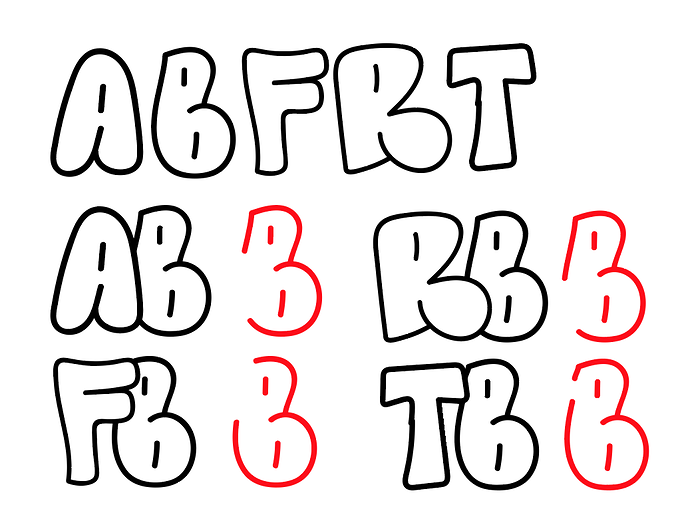 You could cut each glyph vertically so that you can do different versions for left and right connections. That can save you a lot alternates and is more flexible. You have to find a point on each outline where each variation is the same. That is mostly the top/bottom extreme point.

In that case you need an alternate for each other preceding letter. At worst it is 26 alternates. You can use the technique I described above to save some letters.

There was a thread about this same question a few months ago: Color font with overlapping letters

How would you go about setting an alternate for each preceding letter?

We are happy to draw 26 alternates for each character to achieve the most organic look — do we then need to have these as .cut glyphs? And how do we actually write this feature code. Would it be through contextual or positional alternates? Or neither?

We are happy to draw 26 alternates for each character to achieve the most organic look but just wondering how to actually write this feature code.

And the feature code would be as follows:

Note that the number of glyph names in @normal need to be the same as in the groups after the by keyword:

Nice one — gonna give this a go now. Will let you know how we get on with the results.

This works perfect for each of the pairs. The issue we now run into is with the spacing.

I can kern each of the pairs accordingly but then we run into issues when making longer words.

For instance in the below example when writing ABBA, the kerned A/B.A pair looks correct, but then there is no kerning set for B.A/B.B.

The B.B kerning is set and so is A.B set but the word ABBA is then actually made up of A/B.A/B.B/A.B.

We could generate kerning pairs for all pair combinations (although clearly not the right solution) but then we will run into the same issue when any word is longer than 4 letters.

Do you think there is anyway to resolve this? 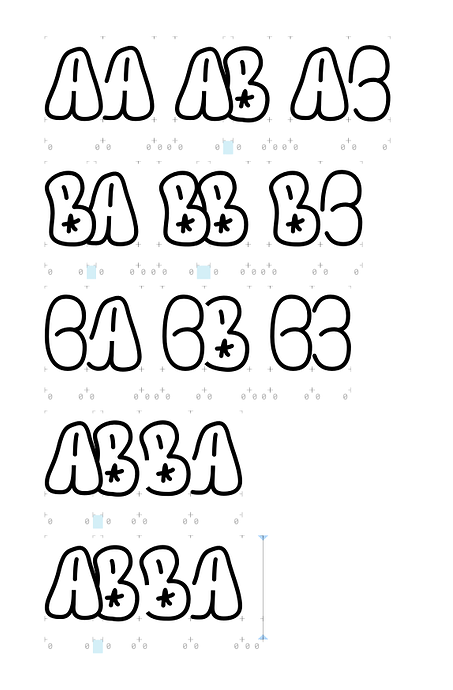 You don’t need to use kerning in this case. For example, B.A will always follow A, therefore, instead of defining a kerning pair for A and B.A, you can reduce the left sidebearing of B.A to perfectly fit the B.A shape into the A shape.

Working well now. Next hurdle is to think about how we might be able to have alternates for each of these letters and how this might work with the pairing.

For A and B for example would it be as simple as creating an A.alt and B.alt then an A.alt.B.alt glyph? Or how would you suggest going about this?