I wanted to post this for some time now. Would it be possible to have the preview panel follow the application and stay on top of other open windows? 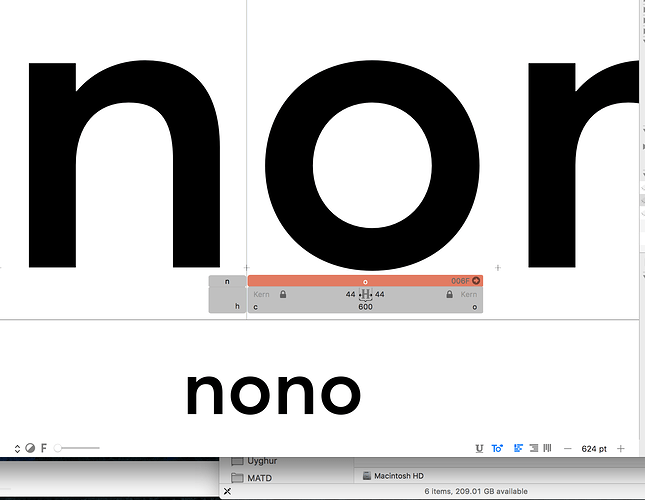 So you want an option like: Keep Preview Window on top?

Hmmmm. Why do you think it should be an option? Why don’t you make it on top by default?

If Glyphs is active and the preview window is still behind a different app, then it is a problem in macOS that I can’t solve easily.

In the above screenshot, where is the preview window?

It’ a similar thing with the Macro Panel. Each time one switches the app and comes back to Glyphs, the Macro Panel is hidden behind Glyphs. I always end up splitting the size of Glyphs and the MP to share half of the screen each, when working with it.

Hi there,
This is an old topic, however, I believe the preview panel always on top would be really useful.
Please! If you are giving the possibility to activate a second preview panel (apart from the default one below the glyph window) Why doesn’t it keep on top? When you clic on the glyph window it goes behind everything so it’s useless.
Only useful for big screens, but not for a macbook.
Having a small preview window on top (with a big letter), may be better than having a very long one (the default) with a tiny sample of what you’re doing. I think the space is not being well used.
Please consider fixing that. Or like Mekkablue said, an option to Keep it on top.
See attachment with an improvised letter for this topic. 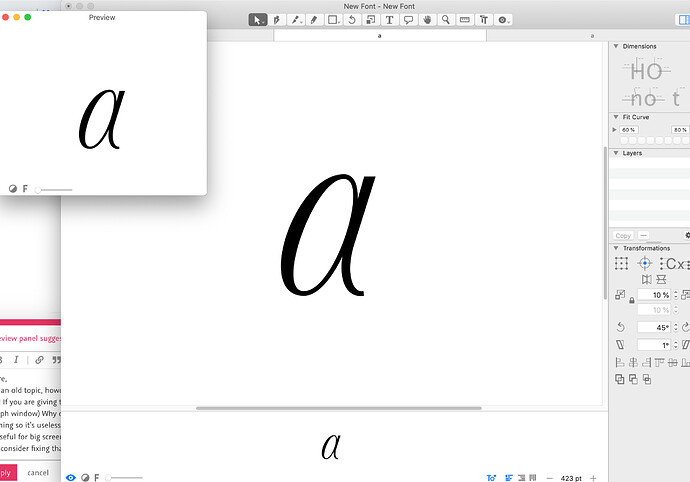 The second panel was an explicit feature request for people with second screens. If you want to stay on the same screen, why not use the preview area at the bottom of the window?

What do you want to use it for?

Hey Rainer how are you?
As I stated above, I think space on the screen is not being used at its best.
The preview area at the bottom is nice when you want to see words or pairs of letters, but I don’t think it is the most useful when designing just one letter. Because if you want to see it bigger, you lose a lot of space of the glyph window.
If you could have the floating preview panel (attached image) with just one letter or two, on top, screen seems bigger. 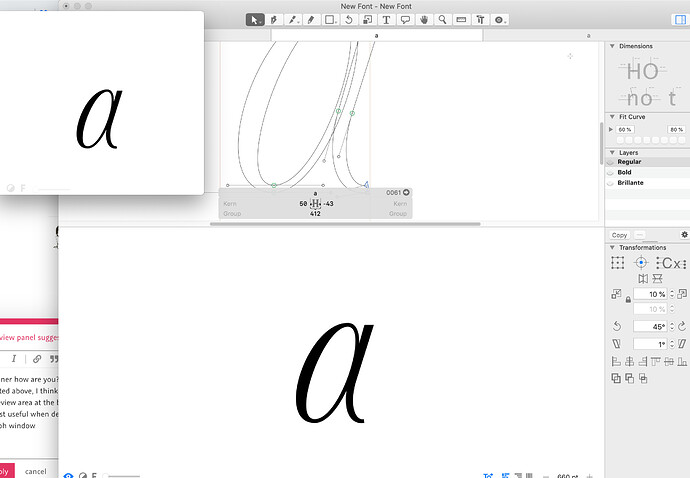 What I do is, I just type the letter twice, next to each other. You edit one, and see the result immediately next to it.

Also, you can temporarily hold down the space bar for a full size preview.

Yes, those tips are ok but it’s not the same.
I want to be able to see what I’m doing in middle sizes, zoom in, zoom out, all in that floating preview window on top.
It seems I’ll have to get used to something that could be better

(and I’m not asking for the time machine haha!)

Do you know if there’s any script/plugin for preview panels out there?

There are a few plug-ins in the Plugin Manager. Show Interpolations and Waterfall come to mind, I am sure there is more.

I know this is an old topic but I am running into a related issue.

For the most part, the Preview Panel stays on top along with the Glyphs app, however, there is one particular instance where this doesn’t work – switching between desktops.

For example: Desktop 1 has Glyphs + Preview Panel on top with Spotify open under it. Desktop 2 has a browser window for testing. When switching from Desktop 1 to Desktop 2 then back, the Preview Panel falls to the bottom of all the applications (under Spotify, in this case). If I click on the Glyphs icon, the panel floats back up.

Is there a way for Glyphs to ensure that the panel stays on top after switching desktops?