After doing some transformations on a glyph in Python the resulting coordinates are fractional. Even though I set the grid spacing back to 1 afterwards and round all the coordinates in a script, the nodes are still coloured red in Glyphs as they are floating point numbers that differ from the integers after 10 decimal places or so: 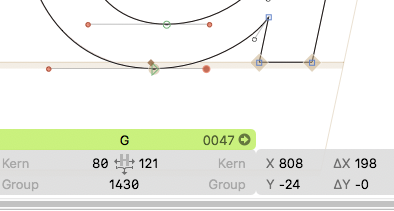 Is there a way I can set the coordinates back to the integer values they were before the transformation?

I looked but couldn’t find a method to remove fractional coordinates in one go.

Those differences are to be expected with floating points. Direct comparison is not going to work. So you need to do:

And the plugin that draws the red dots probably need to do the same.

But when you set the coordinates and the font has a grid, it should round the numbers automatically.

Thanks Georg for your reply. However I’m still a bit confused.

Before processing, the node coordinates look like this, i.e.:

After processing (setting grid to zero, rotating by the slant angle and then rotating back by the same angle), it looks like this, i.e.:

So what is the difference between the node before processing and afterwards? How are they stored internally? Are both floating-point numbers? If so, why is one equal to exactly 808.0 and the other isn’t? This seems to be what’s causing the plugin to paint the node red. Can I restore the previous state programmatically?

Just to make it clear, it doesn’t seem to make a difference if I round the nodes before or after setting the grid to 1; in fact, in this example, I do both. Even moving the path by hand by 1 unit and back doesn’t round the handles.

Can you send me a full script that I can run this myself?

I’ve sent you the filter to the support email. Thanks!