Hey there, needing some help here. I’m working on a typeface that needs to support various accent combinations, but I’m running into a few problems. I have top and _top on all combining accents, but they’re still not stacking properly. On InDesign, some do stack properly, but some others (like /o with tilde and acute or even /n dieresis) do not. What am I missing?

Attaching a screenshot of what I see on Glyphs and InDesign. 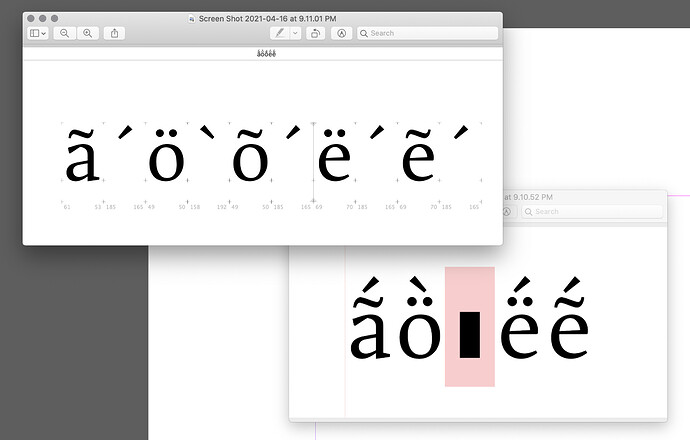 How did you install the fonts. Have you seen this: Eliminating Font Cache Problems | Glyphs and Testing Your Fonts in Adobe Apps | Glyphs

I use an Adobe Fonts folder and did make sure to clean cache. Still only some stack properly…
And why wouldn’t it combine in Glyphs?

Glyphs does not emulate any positioning feature. And I think the problem is related to precomposed Unicode glyphs: if you have e and acutecomb but not eacute, text engines would assume your intention is eacute and return that code point, regardless of what font is currently being used. In the case of the glyphs you are testing, otildeacute does exist as an Unicode character (ṍ U+1E4D) but not the other four. Since InDesign give you that character and the font doesn’t support it, it’s shown as .notdef. That’s what I think is happening anyway.