Question about glyph renaming on export

Hiya! This is probably a very basic question…

I had imported a Devanagari project that I had started in Robofont, using a different character working-name scheme and feature code than the setup you’ve provided us in Glyphs. The only thing I relied on Glyphs for, feature-wise, was the automatic mark feature generation. I’ve had no problem exporting the fonts, and they’ve been working properly in my tests in InDesign and in other environments.

However, the tech team I am working with (who are Robofont-based) have taken the .ufos I’ve generated from Glyphs to do some of the final work on them (merging with a Latin, setting up the font naming table, etc). They’ve said that upon export to .otf, come of the glyphs are assigned incorrect unicode values as their final glyph name. 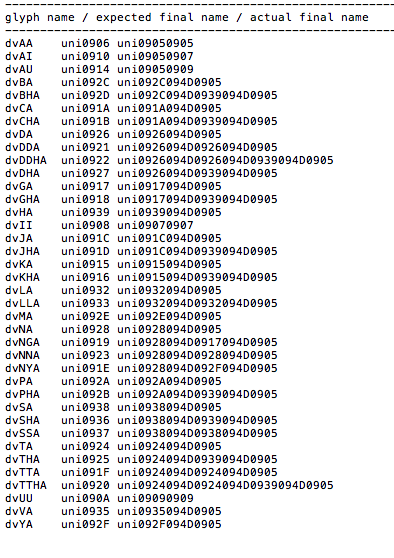 I never altered the GlyphData.xml file to match my naming scheme. Is this the cause? What might be the easiest fix for this?

I would need to see the .glyphs file to know more. Could you send it (by direct message on the forum or by email).

The problem is that this is a deviation from the names that are used by John Hudson and Glyphs is a bit to clever by trying to parse them. And the rules are that each upper case letter is a new component. A conjunct of dvA and dvA doesn’t make much sense but that is where the strange production names come from. For now I would suggest a script that manually sets the production name. Something like this: