I’ve added a substitution that cycles through three versions of each glyph, in three classes. This works perfectly in Indesign (second image) , but not in Illustrator (first image). I’ve tried toggling the Opentype panel, but all I can do is get it to globally substitute one class with another. Ideas? Thanks.

Which feature are you using? calt should work in both apps.

Hi Rainer - I’m using calt. (Following the tutorial). Might the other ‘salt’ feature be affecting things? It was added automatically. 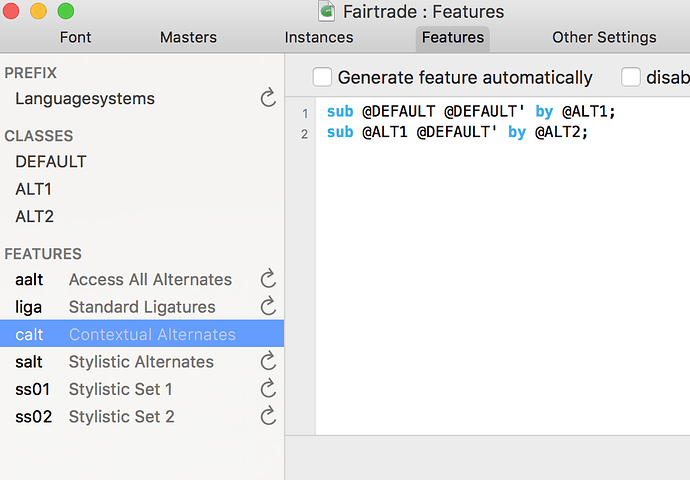 Might be useful to add that to the tutorial.

Hm, though it works the cycling seems to be off by default in Illustrator even with ‘salt’ removed. Knowing end users, this will not be turned on manually. On by default in Indesign. May be an Adobe bug. Any ideas?
Images below - on and off (the default) in Illustrator.

On by default in Indesign:

I cannot see the salt feature, but I suspect it was replacing the contextual alternates to the other.

Assuming you have two alternates, this was probably happening:

calt is on by default after an installation (or resetting Adobe app prefs), but users have managed to switch it off by default.

You can also try other features and see if you find one that is always on and never off, rlig maybe.

Hi Toshi, Rainer - it could be that the apps ‘remember’ previous settings. I’ll try resetting things…

For example, in Indesign if I select a font when there is no text box or text selected on the artboard, this then become the default font whenever I draw a new text box. Maybe other settings behave similarly (though Indesign is the program in which this works…)