I’m trying to upload a family to Myfonts which contains 18 static OTF weights and Variable font. I’ve done this in the past with no problem (or at least just yellow flags which can be ignored) but this time it’s giving red flags that the Regular weight and the Variable have “duplicate style names”.

Obviously the Variable has an instance of Regular built in, but has instances of the other 17 weights as well, and is not calling those out.

At first i thought the problem might be that I’d set a custom parameter “Variable Font Origin” to Regular: 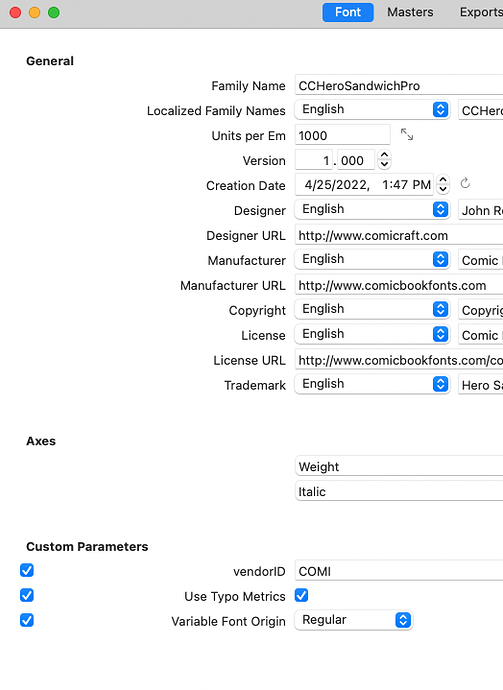 However, I unchecked the parameter (so it’s grayed out), re-output and uploaded and the errors persist.

I would consider this a problem for MF to fix on their end, however when I open the new VF file in Transtype, it ALSO shows the style name as “Regular”, even as it’s displaying the default Light master:

I’ve looked all through the Font Info window settings, and can’t find any other settings for default weights or style names.

Anyone have any experience with this, or know a fix? thanks.

Georg, I will email you the file as well.

Just got this follow-up from myfonts:

Give the two families different family names. Add a variable font setting in Font Info > Exports and call it the same as your static family plus an extension like ‘Var’ or ‘VF’ or ‘Variable’.

Oh how I love a simple solution!! that did the trick. thanks.

Is it maybe the same issue like in this tread: Variable font not exporting Light - #34 by Angele ?